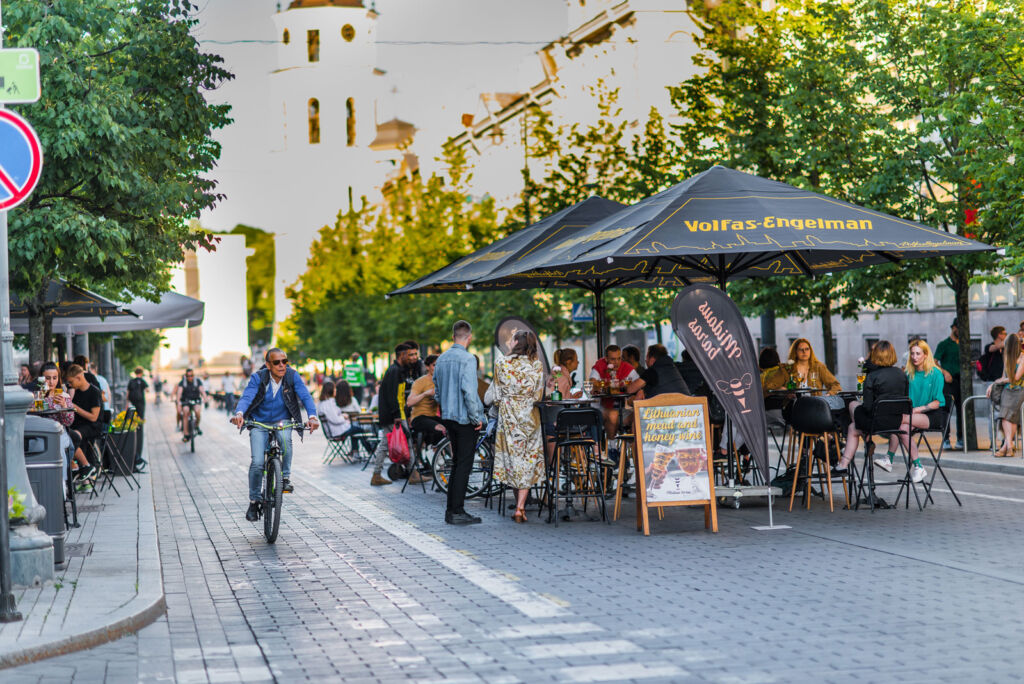 In what will be seen as good news, Lithuania’s capital, Vilnius, has officially reopened. For summer 2021, the City has unveiled a new raft of experiences for visitors, which include dining almost 200 metres above the ground, spending midnight in prison and transporting yourself to another city via a portal.

With Europe starting to recharge its batteries after a year-long pandemic, an invigorated Vilnius, the capital of Lithuania, is already primed and ready with a raft of exciting new things for residents and visitors to experience.

This summer, the Lithuanian capital is broadening its gastronomical, artistic, and leisure travel options with a string of exhilarating activities, including a midnight stroll in a former prison in the city centre or fine dining over the capital’s rooftops. 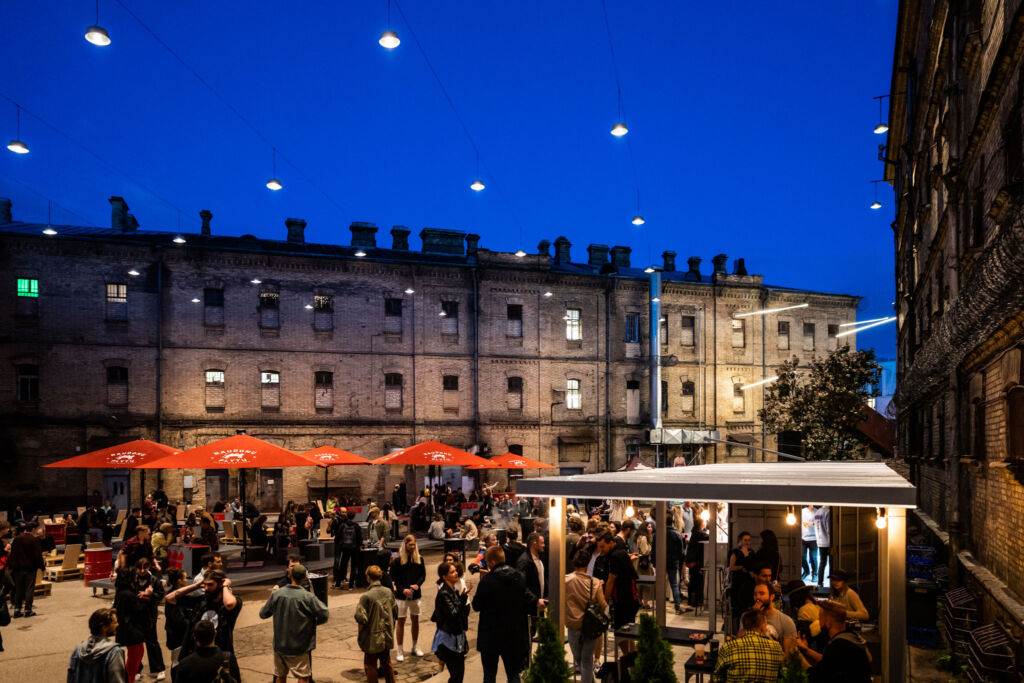 “Lukiškės Prison 2.0“
Some of you might know this century-old prison from the smash-hit TV show Stranger Things. It’s now starkly different from what you might have seen on the screen following an astonishing repurposing exercise. It’s quite amazing when you think that it was a functioning prison just two years ago, and today it is home to 250 artists and artistic and cultural events, concerts, festivals, and exclusive tours. 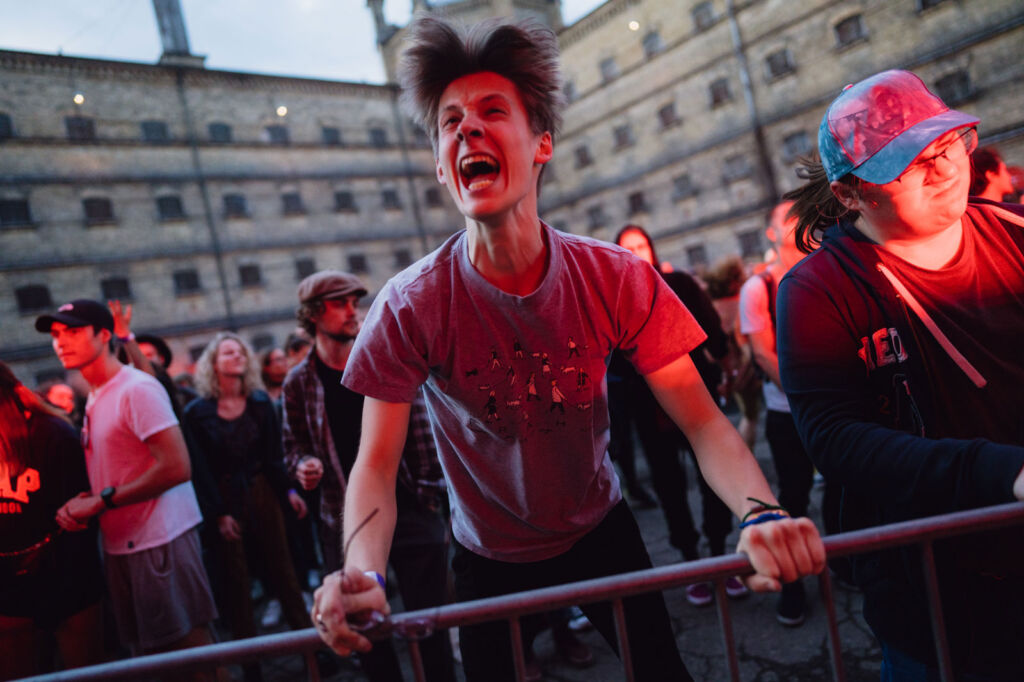 A must-try for visitors is the prison’s daytime tour, where visitors can learn about its history, architecture, and the daily life of inmates, including political prisoners. During the 20th-century, Lukiškės held many renowned Lithuanian authors, and it even hosted Menachem Begin, Israel’s Prime Minister and Nobel Peace Prize laureate, who was imprisoned for a year in 1940. The nighttime tour will reveal the unseen side of the century-old buildings, and just the beam of a flashlight will illuminate your way while on this adventure.

TV Tower Restaurant
If you want to see what Vilnius is really all about, its layout and history, the best way to do this would be from above. One of the most famous landmarks in Vilnius and the highest building in the country (standing 326.5m above ground) is the TV Tower which is also a favourite of fine-dining connoisseurs and adrenaline enthusiasts. One of the most popular BASE jumpers in the world, Cedric Dumont, skydived off the Tower a decade ago.

Visitors who don’t feel inclined to experience the thrill of extreme sports needn’t worry. Instead, they can enjoy the breathtaking views of the City in a restaurant, complete with a recently opened adjacent outdoor cafe set up 180 metres above the ground. 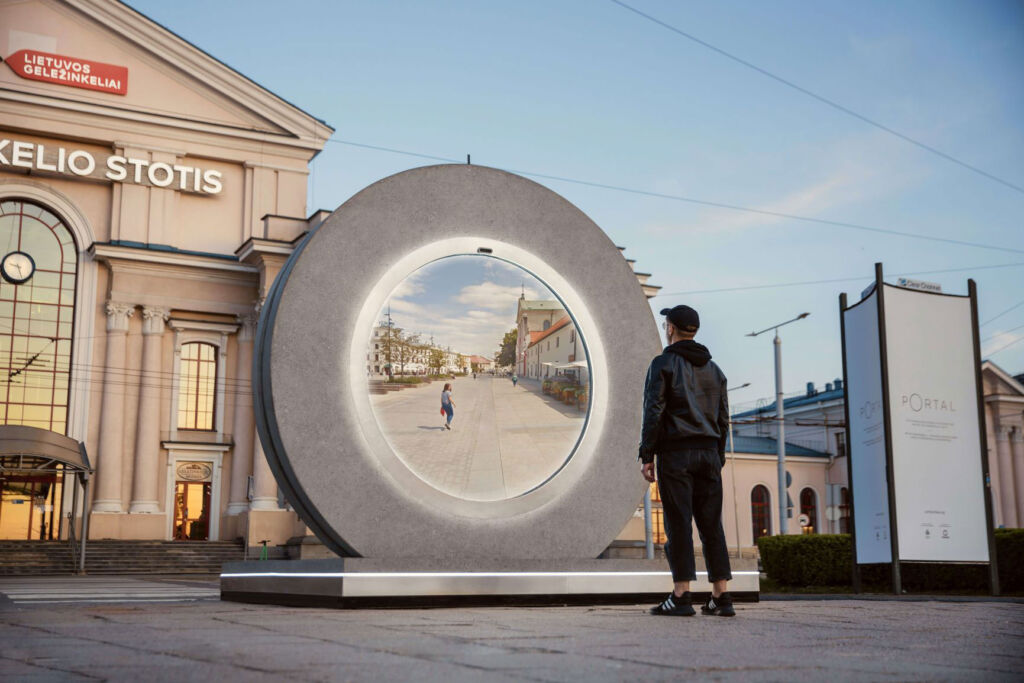 Vilnius is introducing the world’s first tourism teleportation device. It is a “Portal” to Lublin, Poland, and can be found adjacent to the train station. While the world is yet to open fully, the “Portal” lets the residents and the visitors of both cities watch each other in real-time. 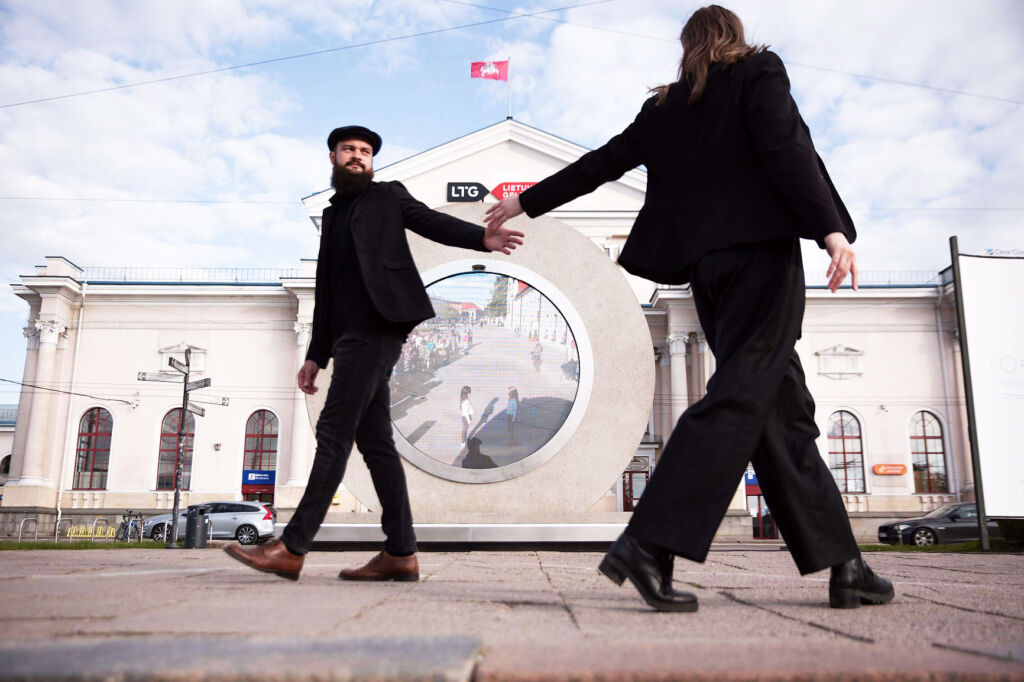 The sci-fi inspired design of the installation signifies a digital bridge towards unity in times of physical separation and brings both cities to a new and amazing futuristic world.

The Baltic Triennial 14 highlights the geopolitical race between Central and Eastern Europe in terms of values, esthetics, and everyday life. The exhibition also features the works of artists from different European countries, including Lithuanian architects, who have designed the Lithuanian pavilion in the 17th Venice Architecture Biennale. 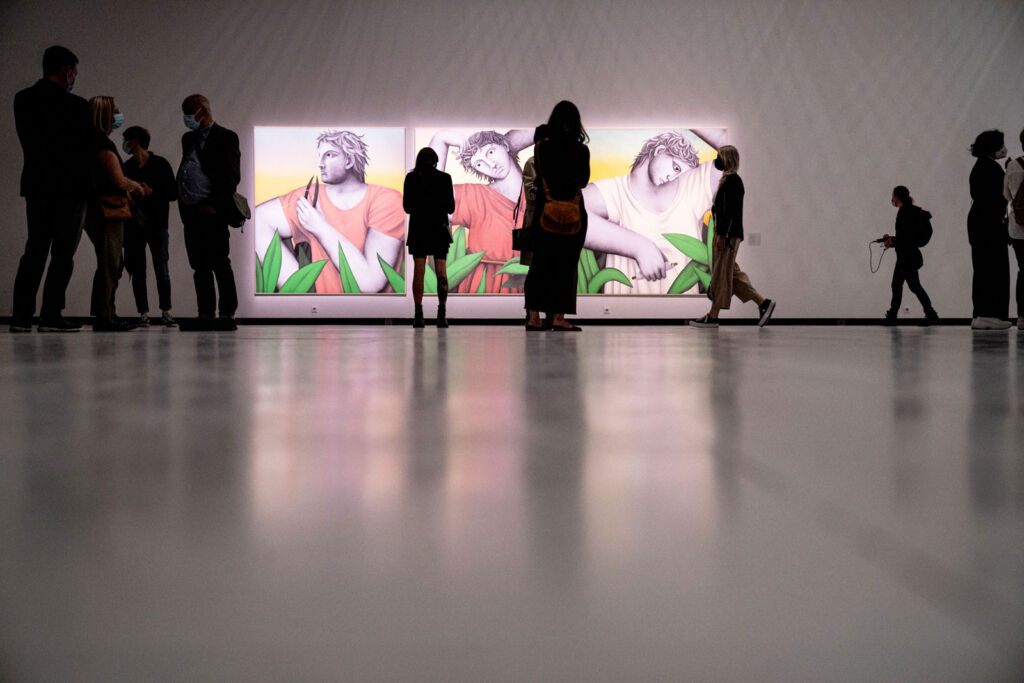 One of the displays, “Agents” by Anastasia Sosunova, shows two agents in a car, discussing Lithuanian folk art history and its transformational journey. The Baltic Triennial exposition is also set up all throughout Vilnius, showcasing its notice-worthy locations, such as Valakampiai Beach.

Gastro-explorations in unexpected urban locations
WIth Vilnius now officially reopened after the pandemic, its gastronomical scene is exploding with new food experiences, making Vilnius once again a giant open-air cafe like last year. 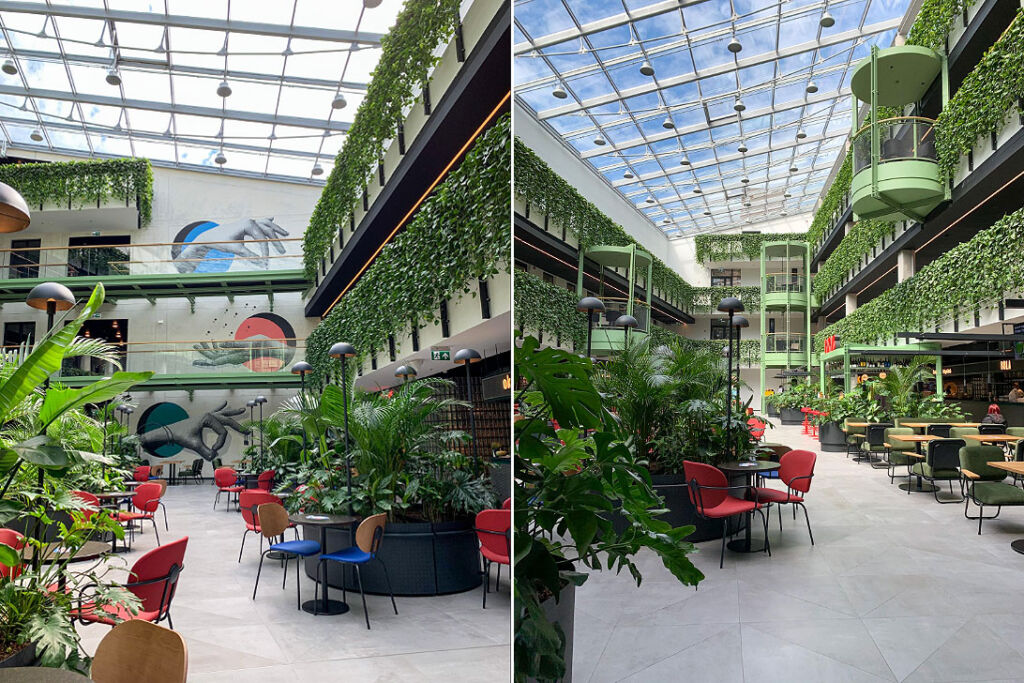 Vilnius has been ranked as the Greenest City in Europe thanks to its abundance of natural spaces, which are ideal for relaxation and eating out. One such spot is the brand-new Paupys Market, (see above) located in the Old Town near the legendary Užupis Republic—the smallest district in the City.

It is a place favoured by the artistic community, intellectuals, and moguls. It is a wilderness-inspired gastronomic hub with a number of restaurants, food halls, and a gourmet alley that allows visitors to enjoy a full-on picnic without leaving the town. 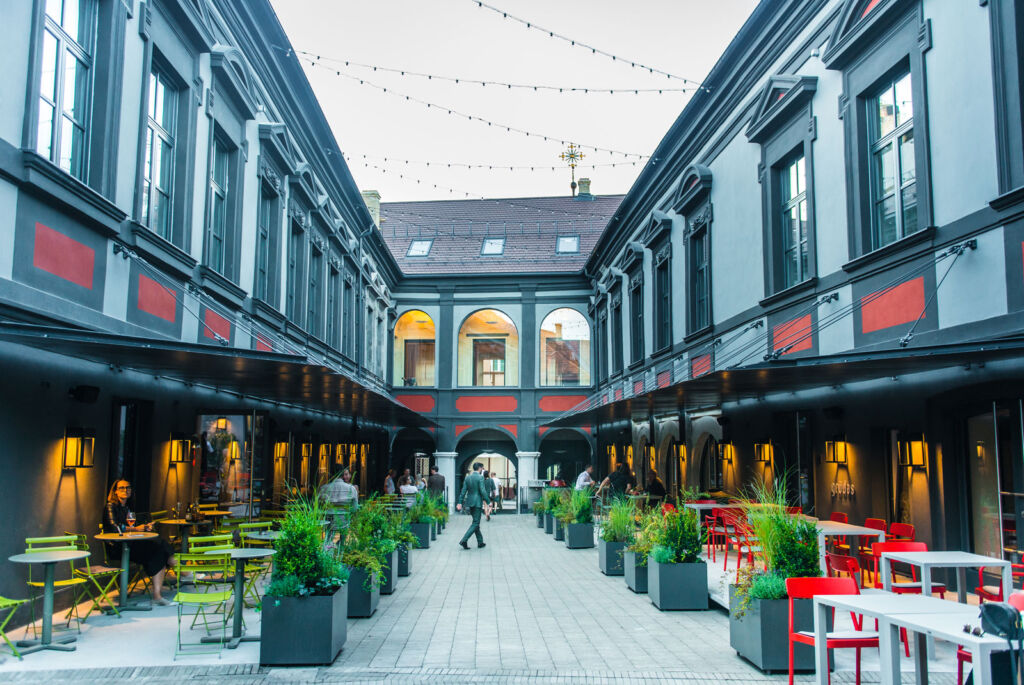 Nineteen18 restaurant puts a unique spin on Lithuanian culinary heritage and does not shy away from weird ingredients, such as preserved pine flowers or roasted hay. Some unexpected dishes are fir cambium, burnt oak leaves, apple, carrot, and bee pollen.

14horses focuses on a plant-based menu, spiced up with unexpected local ingredients like cured egg yolk or ramson capers. Visitors are able to try out dishes like celery root tagliatelle with burnt cucumber or pike caviar with waffles.

The legendary restaurant of the Soviet Union, Neringa, has been recently remodelled and reopened to fuse the Soviet period with modern cuisine. The building’s interior has been preserved and stays true to 1959. It features Soviet motives and symbols and has been included in the list of Lithuanian architectural heritage sites, making the hotel and restaurant a fascinating time machine to the past. 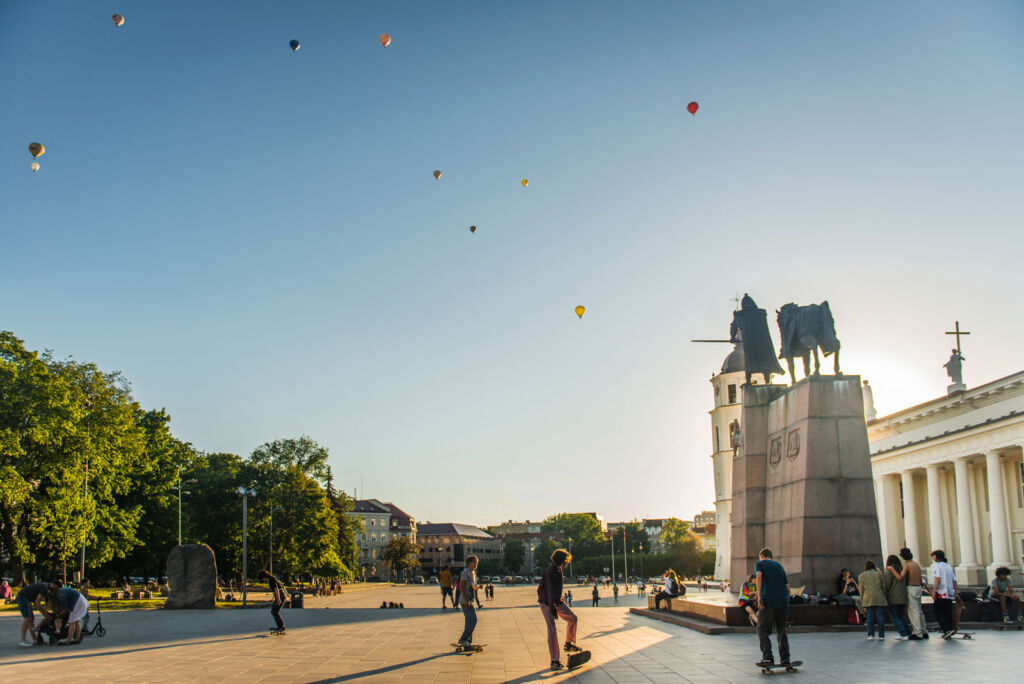 The novel gastronomical and artistic experiences in Vilnius mark the new post-pandemic chapter in the capital’s cultural scene as the City eagerly welcomes the summer tourist season. Visitors can reach Vilnius by direct flights from London’s Stansted, Southend, Luton, and City airports, and also from Liverpool and Belfast.

More details about the activities above and other top experiences in Vilnius, as well as additional particulars about the City, are available here.