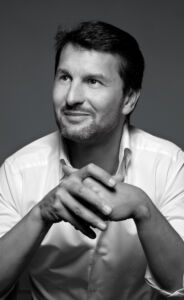 Maximilian Büsser was born in Milan, Italy, before moving at an early age to Lausanne, Switzerland where he spent his youth. Growing up in a multi-cultural environment and family – his father was a Swiss diplomat who met his mother, an Indian national, in Bombay – led Büsser to develop a cross-cultural broad-based approach to his life and to business.

In July 2005, at the age of 38, Maximilian created the world’s first horological Concept Brand: MB&F (Maximilian Büsser & Friends) in which he is now partnered with Serge Kriknoff. Büsser’s dream with MB&F is to have his own brand dedicated to developing radical horological concepts by working in small hyper-creative groups composed of people he enjoys working with. MB&F presented its first timepiece, Horological Machine No1 (HM1), in 2007 and followed that up with HM2 in 2008, HM3 in 2009 and HM4 Thunderbolt in 2010, with more radical machines in the development pipeline.

Entrepreneurship is Maximilian Büsser’s forte. In 1998 and only 31 years old, he was appointed managing director of Harry Winston Rare Timepieces in Geneva. During his seven years there Büsser developed the company into a fully-fledged and well respected haute horlogerie brand by developing the strategy, products, marketing and worldwide distribution, whilst integrating design, R&D and manufacturing in house. The results were a 900% increase in turnover and the positioning of Harry Winston as one of the leaders in this very competitive segment.

Prior to Harry Winston, Maximilian Büsser’s love for high-end horology was strongly imprinted by his first employer, Jaeger-LeCoultre. During his seven years in the senior management team during the 1990s, JLC strongly increased its profile and multiplied its turnover by a factor of ten. Büsser’s responsibilities at Jaeger-LeCoultre ranged from Product Management & Development to Sales & Marketing for Europe.

Maximilian graduated in 1991 with a Masters in Micro technology Engineering from the Swiss Federal Institute of Technology, Lausanne.

Read our interview with Maximilian Busser