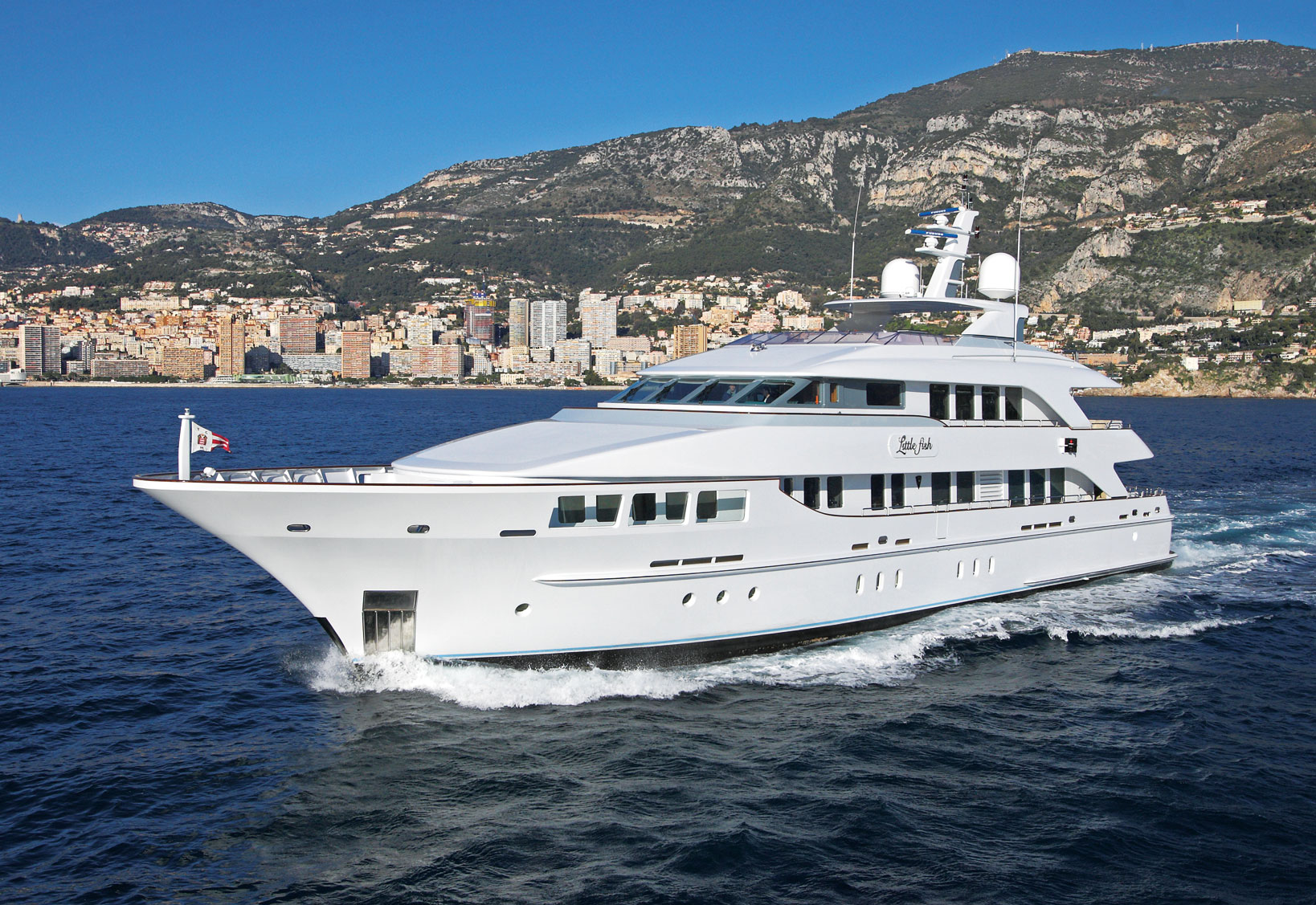 If there’s one place on the planet synonymous with luxury, it has to be Monaco. And if there’s one expression of the luxury lifestyle that all of recognise but few of us experience, it has to be the superyacht – whether that means owning, chartering, or simply relaxing on one.

No wonder, then, that some of the world’s finest superyachts converge on the Principality once a year for the Monaco Yacht Show in a dazzling display of wealth, style and taste that simply can’t be matched at any other venue. 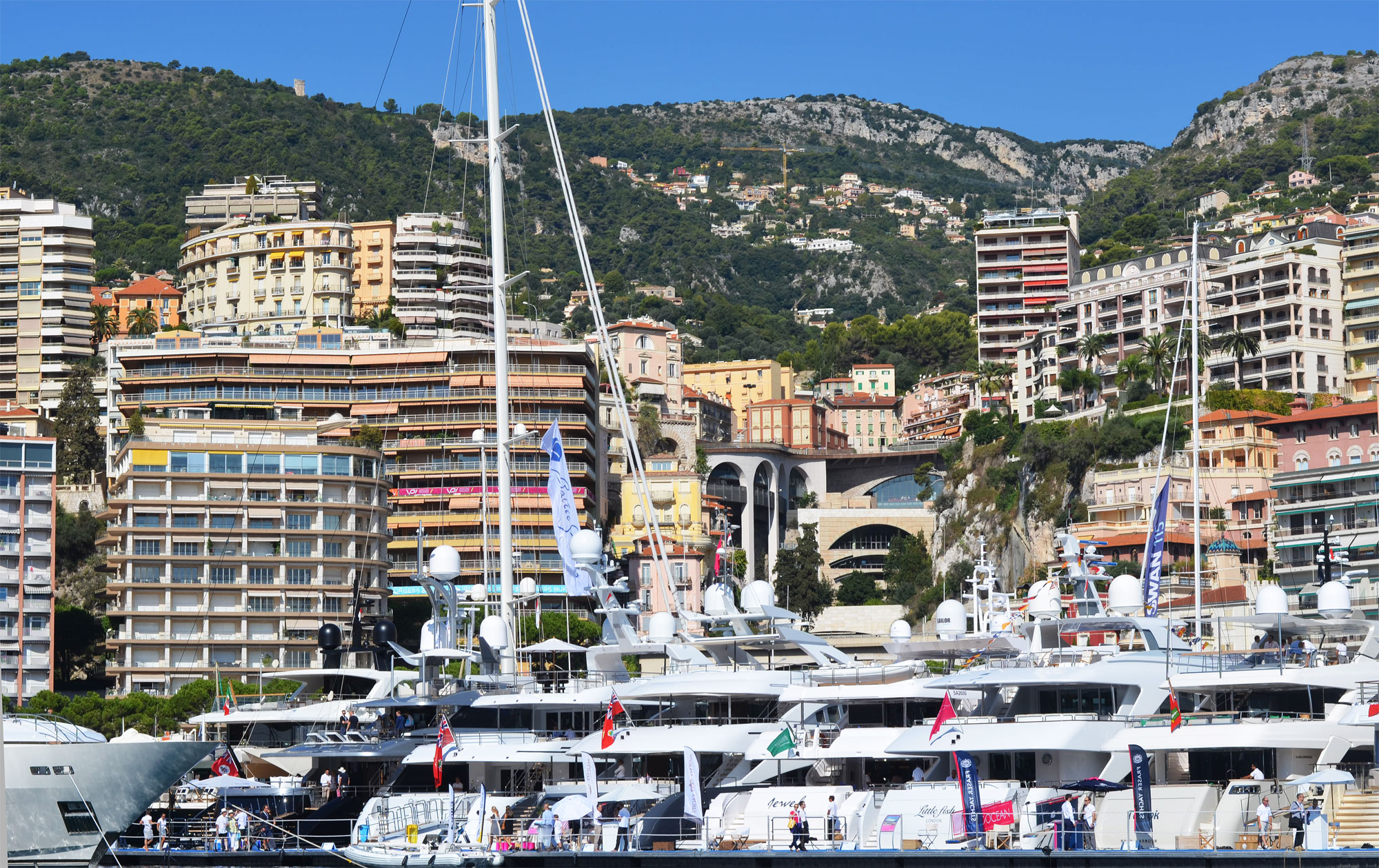 It’s the sort of event at which people who’ve been incredibly successful in life and treated themselves to the superyacht of their dreams could turn up and discover, to their dismay, that a yacht identical to theirs has been slung from the back of an ocean-going behemoth, ten times the size, and is being used merely as a tender.

But the Monaco Yacht Show is so much more than just a “mine’s bigger than yours” contest, as I found out when superyacht brokers Ocean Independence invited me to join them there.

For the non-billionaires among Luxurious Magazine’s readers (and I assume there must be some), almost everything about the Monaco Yacht Show and the superyachts there is jaw-dropping. 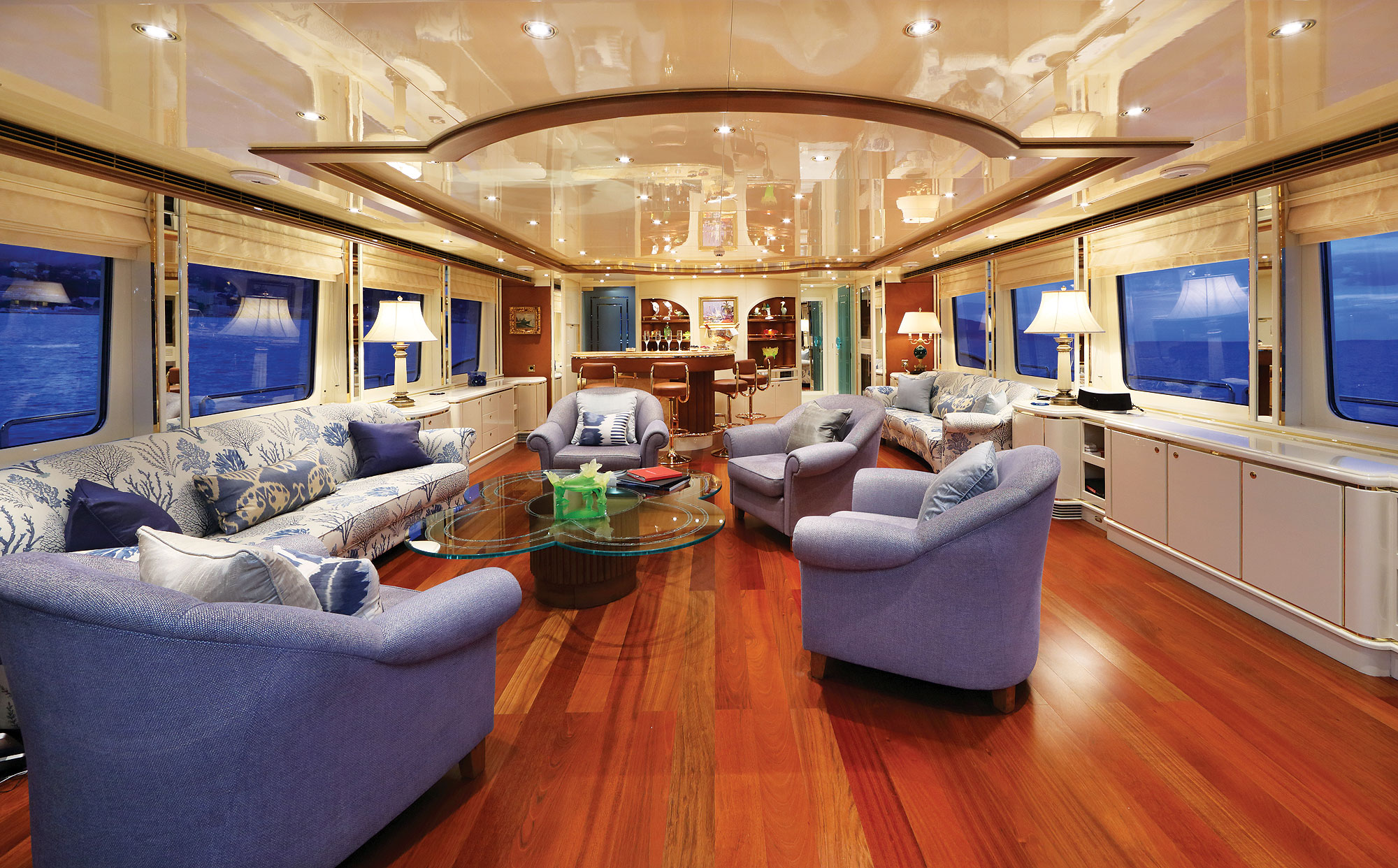 There are palaces on land that are less palatial than some of the superyachts, while the cost of the most expensive vessels would leave a Euromillions lottery winner feeling financially embarrassed and inadequate even with a multiple-Rollover jackpot in his pocket.

One of the superyachts Ocean Independence was showing, an ice-breaker called Voyager, even sported its own helipad on deck with a little blue helicopter aboard, no doubt dispiriting the owners of other superyachts nearby who’d thought their own were the best.

The helicopter wasn’t the only flight of fancy there, either, as owners with apparently limitless wealth view their superyachts as a chance to indulge themselves, express their taste, influence people’s opinion of them, or, in extreme cases, fling the bling.

The young fashion bloggers I was rubbing shoulders with in the Ocean Independence party were drawn to the more modern superyachts like Logica, while I was captivated by Steel, an ice-breaker pleasure-yacht that resembled a cross between a gentlemen’s club in St James’s and a particularly elegant country house. 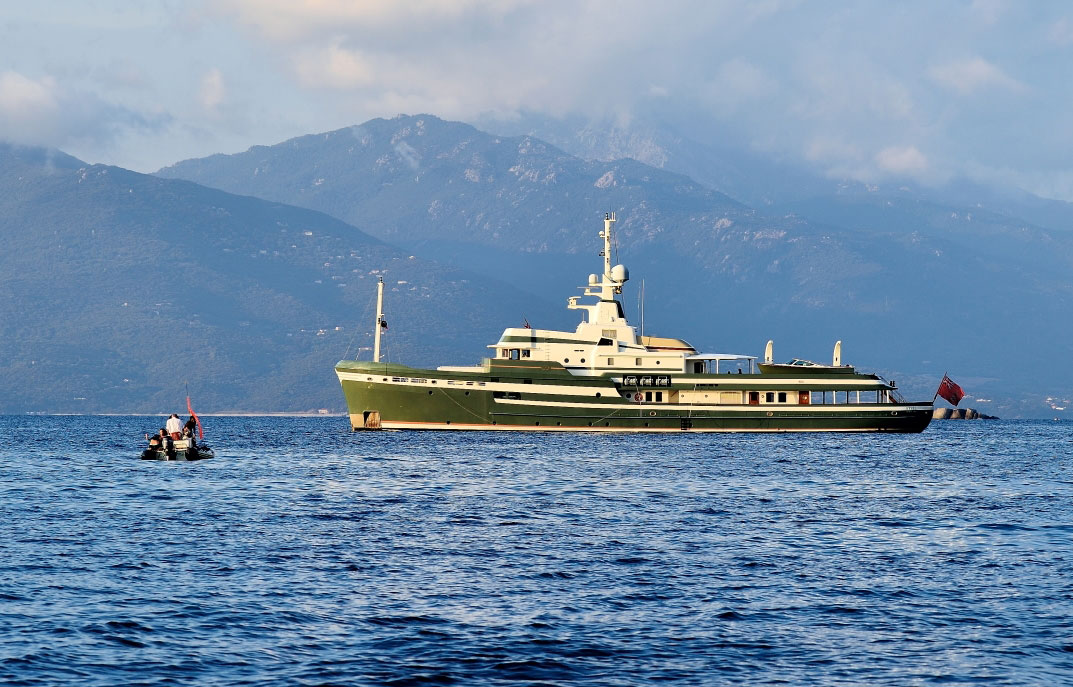 Perhaps the owner belonged to one of the former and already owns one of the latter, as his impeccable taste pervaded every inch and every aspect of Steel. Money had clearly been no object, and no object he’d chosen was in the least bit objectionable to anyone who appreciates the finer things in life. Polished wood panelling is everywhere on Steel, with built-in book cases and cabinets, a dining table bigger than many people’s entire dining rooms, and a feeling of comfortable solidity that makes you forget you’re on a yacht at all.

Steel, to me, looks like a billionaire’s superyacht should be: opulent, beautiful, tasteful, and luxurious to the touch as well as to the eye. 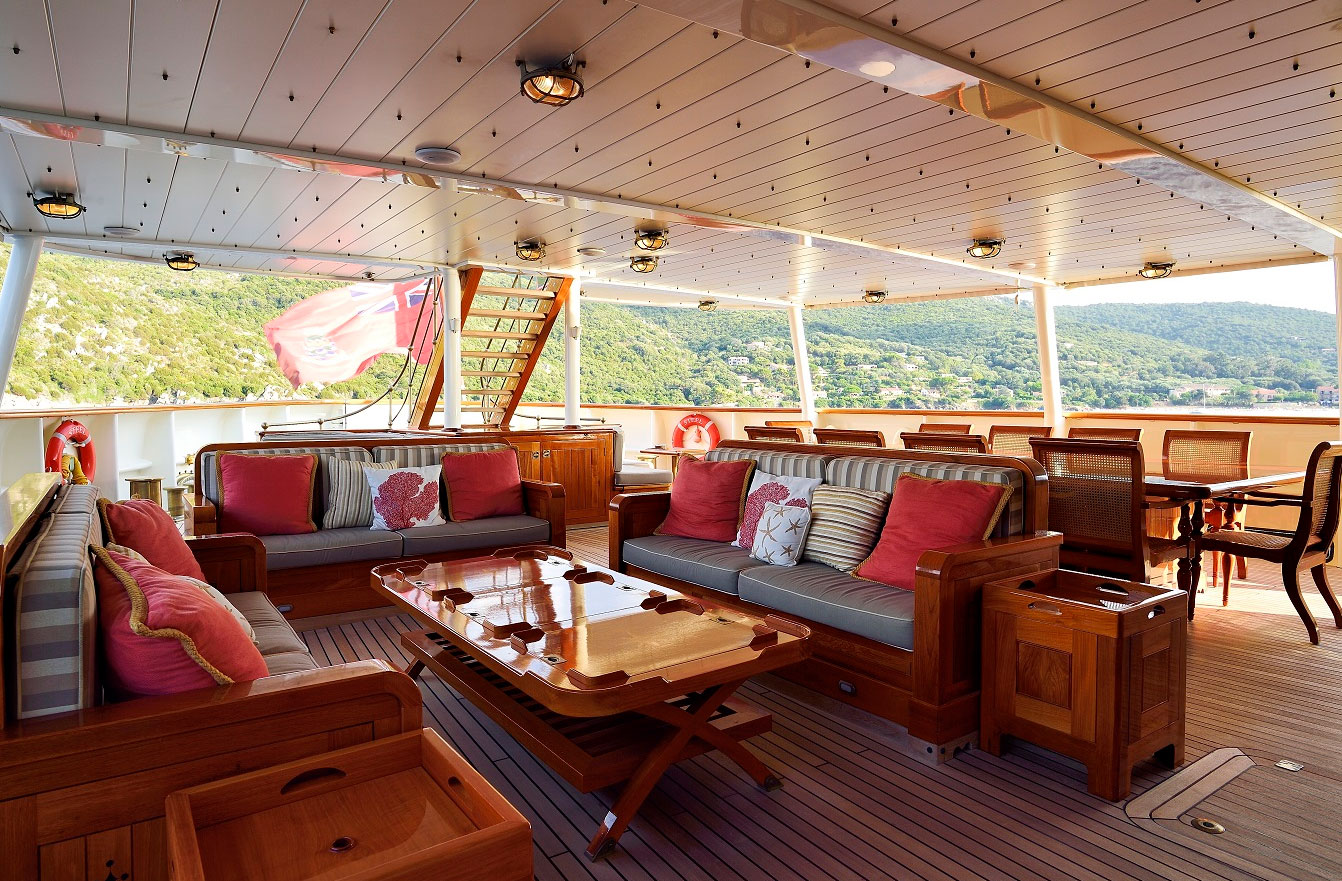 Whether it’s the panelled four-poster bed, the claw-foot bath, the chandeliers or the gracious staterooms, Steel takes the grandeur of the world’s classic luxury ocean liners and doubles it, with the quality of finish and attention to detail that I usually only associate with the finest five-star hotels. 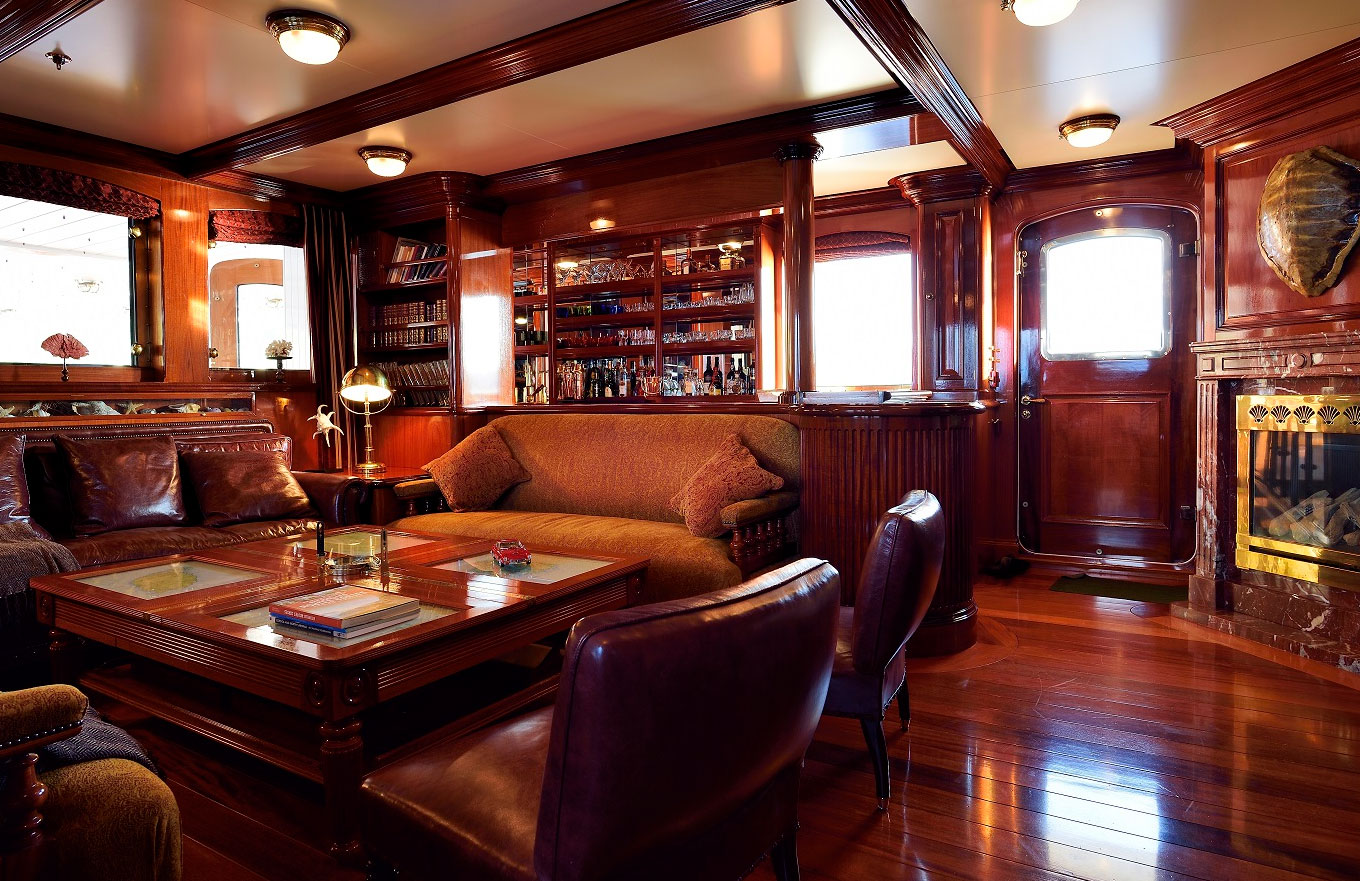 And yet Steel is for sale through Ocean Independence, only six years after she was built at Pendennis in Cornwall. At more than 54 metres long and able to accommodate up to 12 guests and 12 crew, it’s a go-anywhere superyacht that could be yours for 29 million Euros. Plus VAT.

Logica, in contrast, is much more boutique-hotel. Dark and sleek, the interior designers have been given the creative freedom to come up with the best that money and modern taste can buy: huge open spaces, mirrors everywhere, sun-decks, designer dining chairs, glass tables, flooring punctuated with chrome strips. That sort of thing. 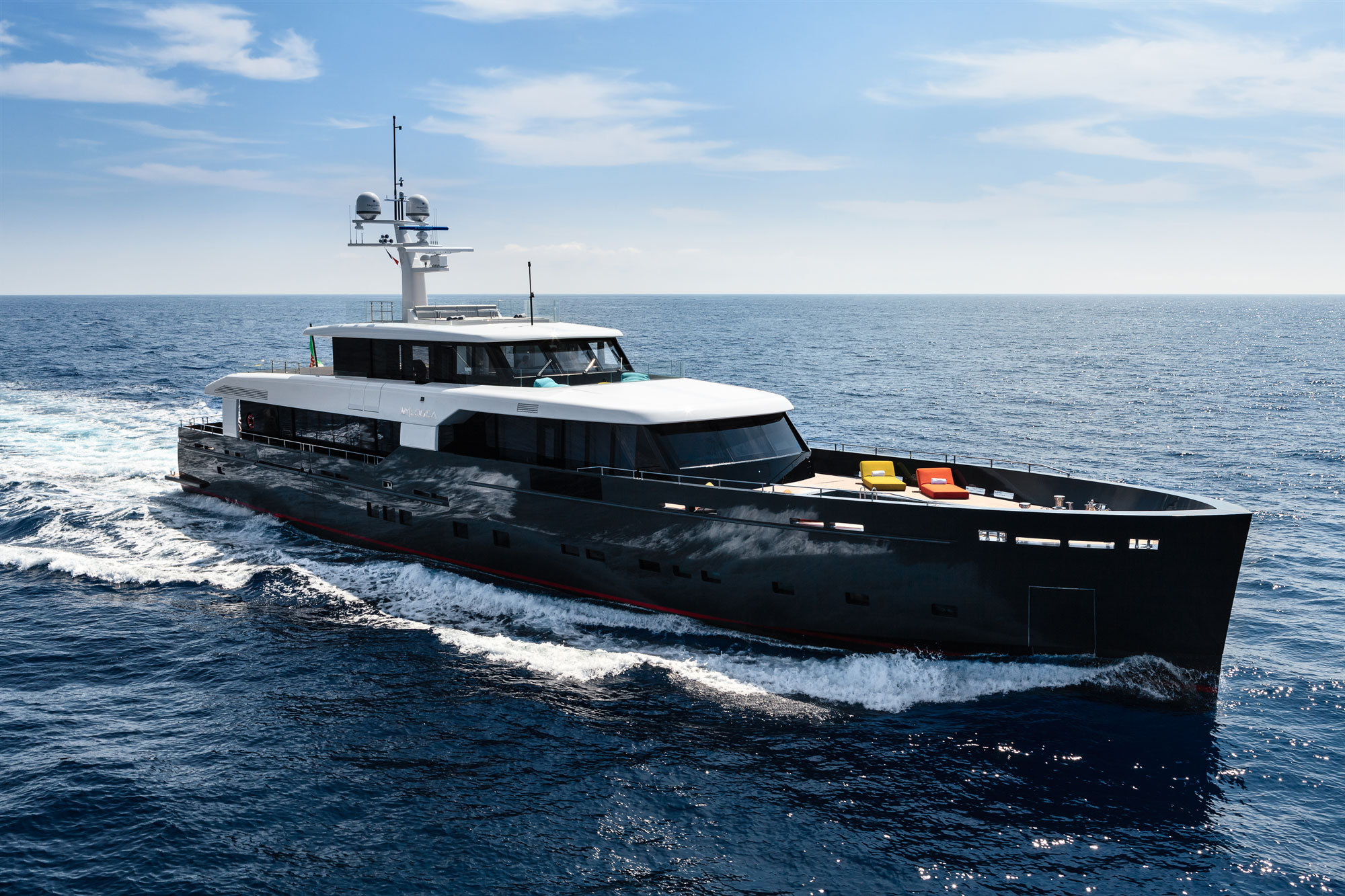 Those who prefer the modern interior design of the candidates’ house in The Apprentice on BBC TV in the UK rather than the traditional splendour of Downton Abbey will absolutely love Logica – and everyone who saw it at the Monaco Yacht Show was captivated by the on-deck swimming pool.

Slightly shorter than Steel at 45 metres, Logica can also accommodate 12 guests, with eight crew, and can manage a sprightly 17 knots. She is less than two years old and considerably less expensive than Steel at 17 million Euros, this time including VAT.

Bigger than either, Voyager drew a huge amount of envious attention at Monaco, not least because of that helicopter – a status symbol among status-symbol superyachts. 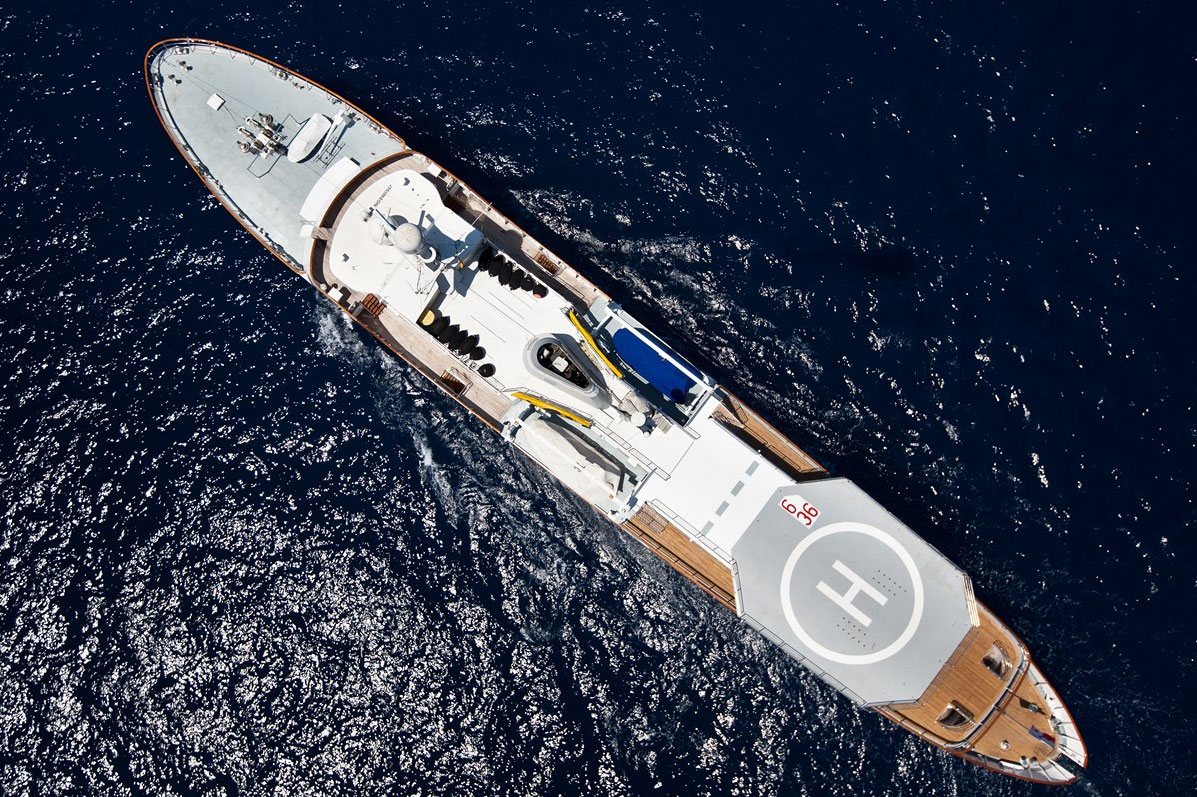 Built in the Seventies and much more conventional in appearance than Steel or Logica, Voyager is said by Ocean Independence to be more of a working superyacht for owners who’d like to explore the world rather than merely anchor off Monaco and enjoy the nightlife. She’s been given a make-over with a more contemporary look, and does include, should anyone doubt her luxury credentials, a grand piano in the gloriously glamorous dining room. Voyager looks very much like a scaled-down version of a cruise ship and is perhaps less intimate than Steel or Logica, but is built to appeal to the true billionaire adventurer who wants to get out there and explore the world on his or her own terms, in comfort and safety. And of all the features it has, that huge letter H on the upper deck makes it King of the Monaco Yacht Show as far as I’m concerned.

Ocean Independence has the world’s largest portfolio of superyachts for sale or charter, so if that billion’s burning a hole in your pocket and you’re not sure whether you want to own a superyacht or not (problems, problems!) you can charter one instead and see if the lifestyle suits you. 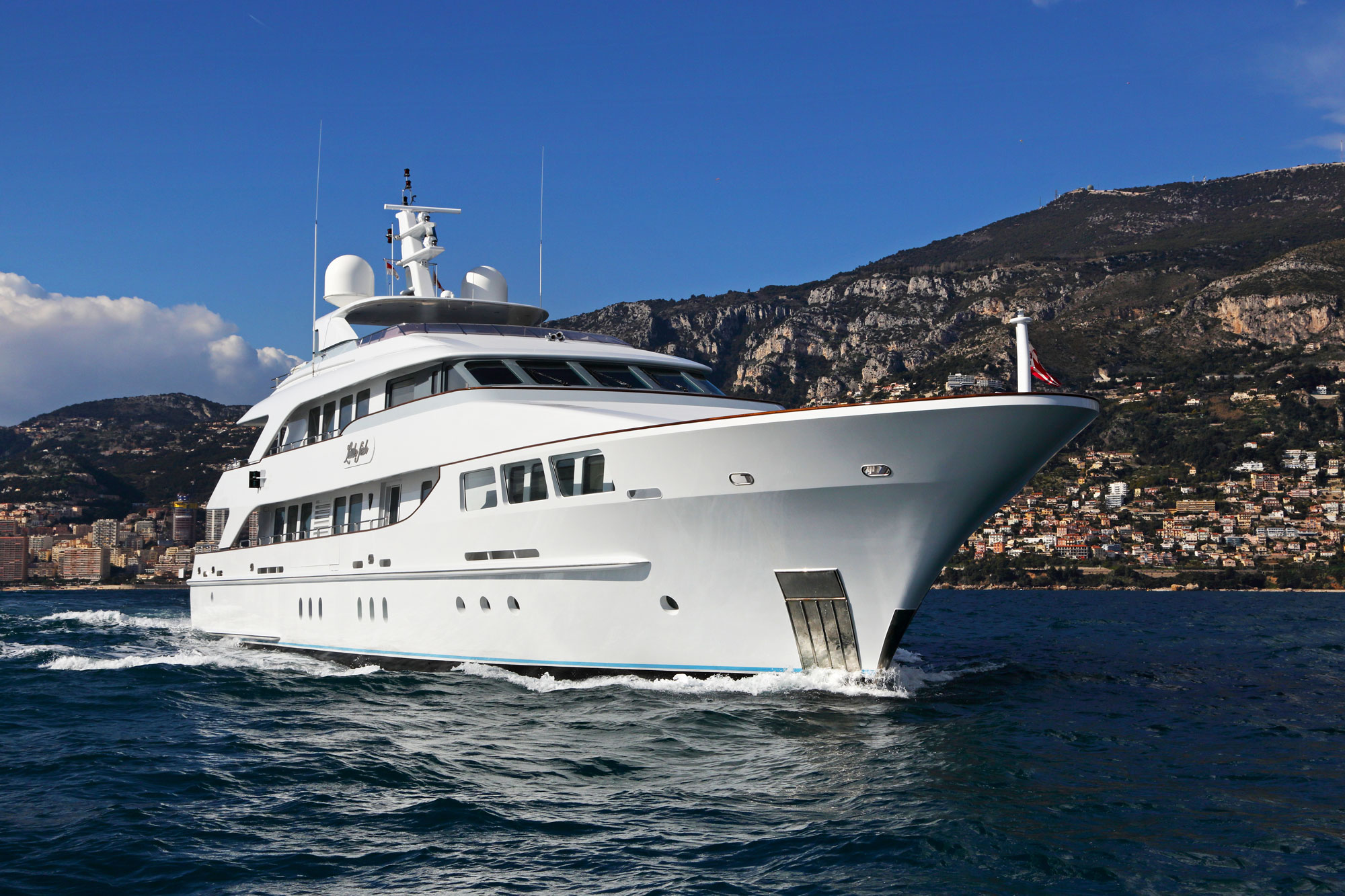 Haven’t tried it myself yet, but I’m told that chartering a superyacht is exactly like owning one, but without any of the responsibilities.

So long as you don’t endanger it, I was told at Monaco, you can instruct the crew to take it anywhere while they wait on you hand and foot – if you want them to – and indulge you in every way imaginable.

Hotels like The Ritz in London pride themselves on having a very high staff-to-guest ratio to ensure the most impeccable service, but Ocean Independence says the crews on their superyachts are even more numerous to ensure that everyone aboard feels a million dollars. 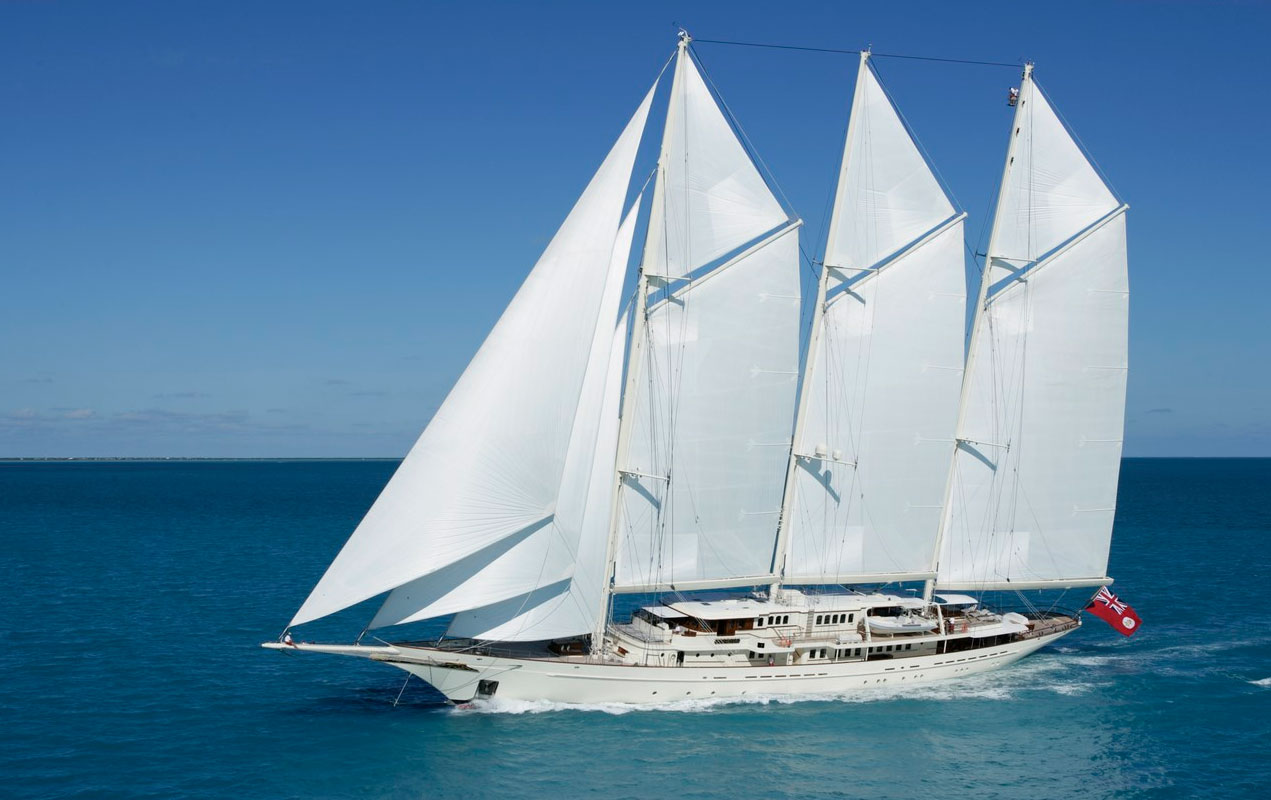 And talking of millions of dollars, they will come in mighty handy. Athena, for instance – the world’s largest sailing yacht you could charter – could be all yours for a mere 425,000 US dollars… for a week. And that’s “from” $450,000, so it all depends on how extravagant you feel.

It’s easy to see the appeal of a superyacht charter. Those of us in the UK with memories long enough may recall a TV advert for Imperial Leather soap in which a woman was luxuriating in her sunken bath, flicking through holiday brochures, before picking up the bath side phone (unheard of in those days) and saying: “Simon… Bermuda.” 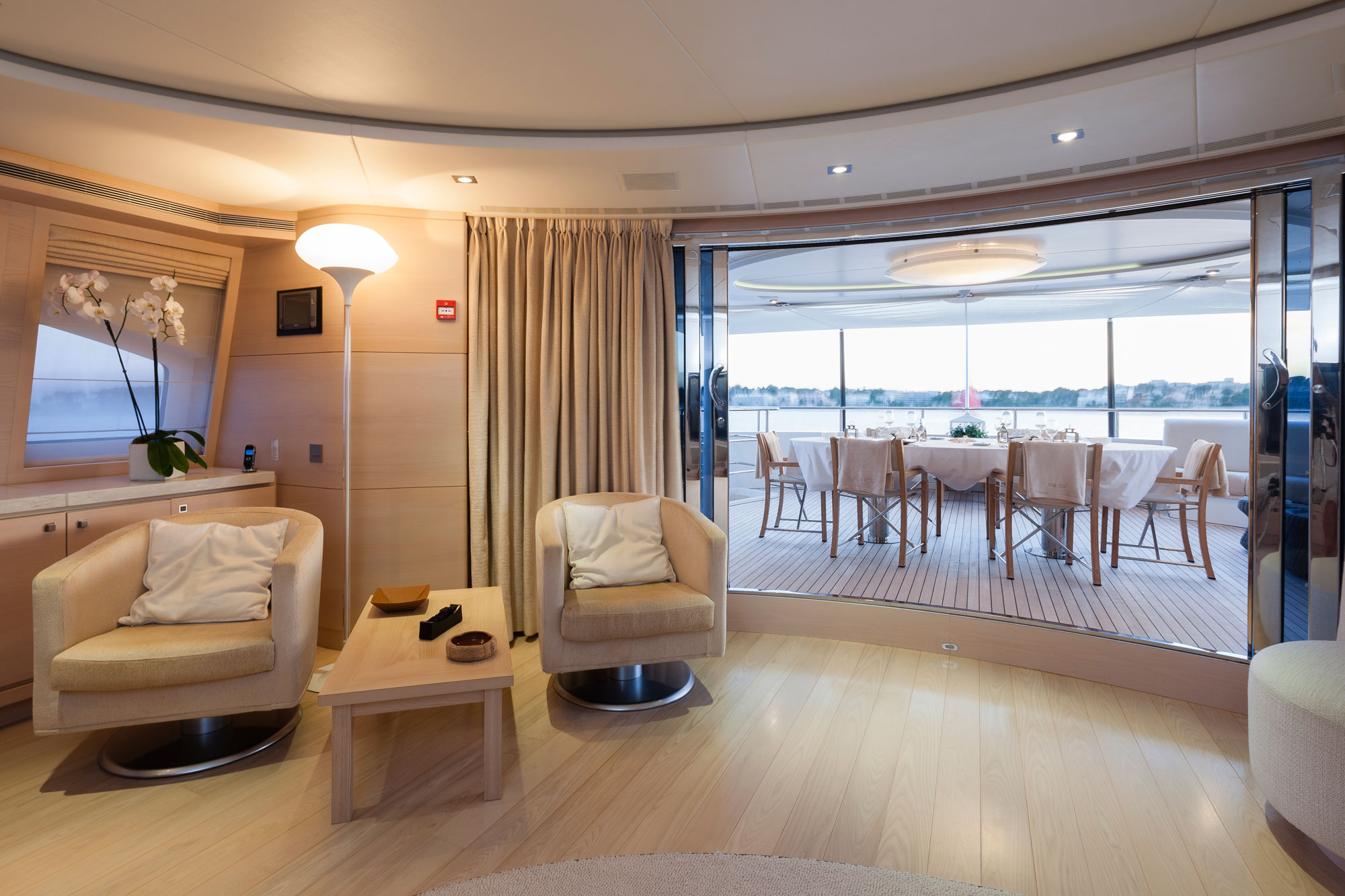 The camera pulled back and switched to an external shot of a private jet which banked gently and headed off, presumably, to Bermuda, the implication being that it had been cruising the skies idly while Madam made up her mind.

Glorious stuff, but a reality for those in the superyacht league. Your five-star hotel, instead of being attached to its foundations at 150 Piccadilly or overlooking Casino Square in Monte-Carlo, can go wherever you want it to… and no doubt the crew will be happy to take their orders from your own sunken bath if that’s what you prefer.

You can have whatever you want to eat, to drink, to play with, while the crew deal with everything discreetly and leave you with nothing to do but relax and enjoy yourself – and to the self-made millionaires and billionaires who tend to be Ocean International’s clientele, that freedom, that space, that privacy is high on the list of attractions.

But fun doesn’t have to have a multi-million price-tag. The young bloggers (every inch the embodiment of The Beautiful People) and I were treated to a tender ride from Monaco and along the coast of the French Riviera. 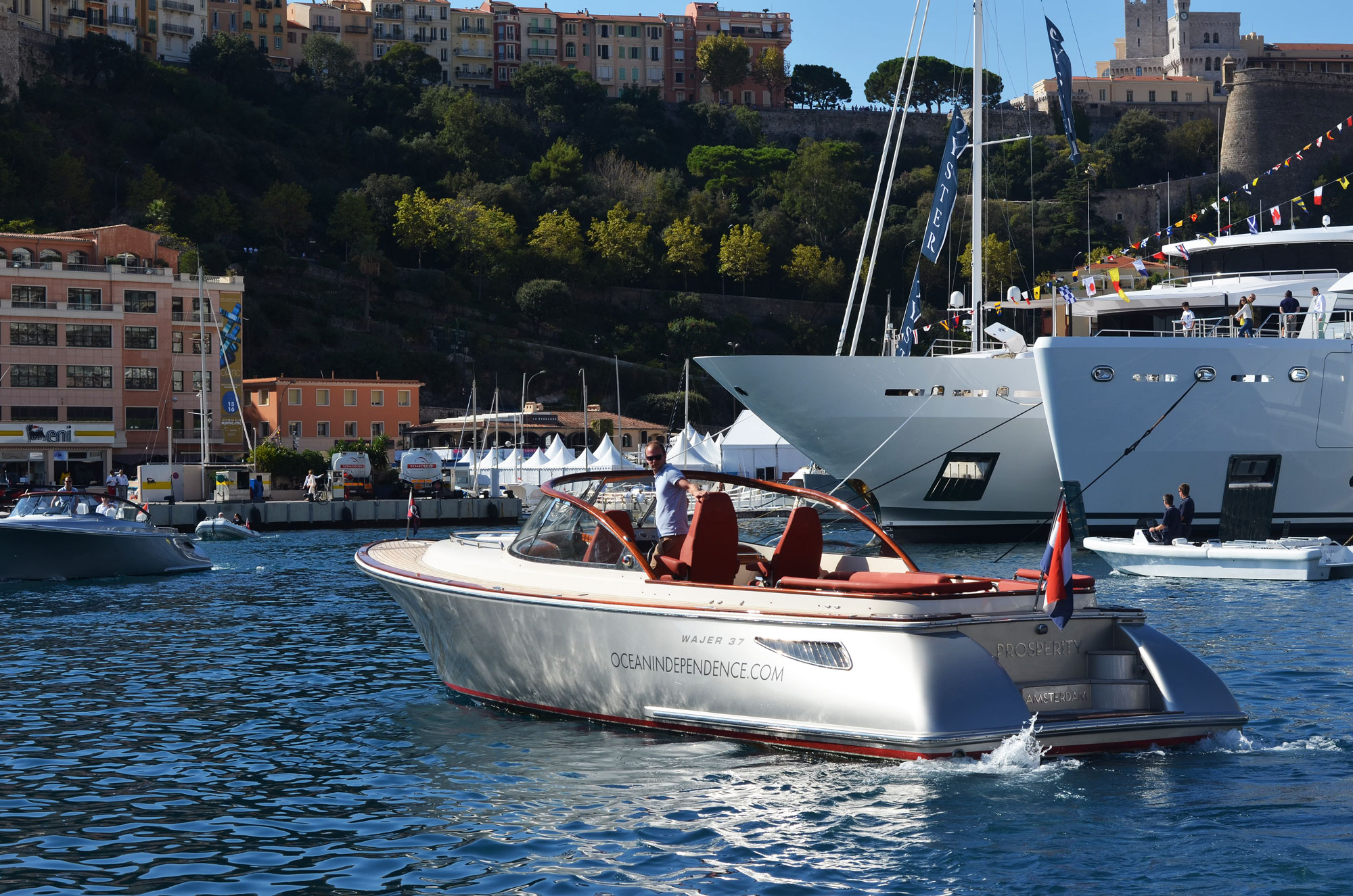 Nothing much to do with superyachts, but wow, it was sensational. We set off fairly sedately, not daring to even splash one of the superyachts with our wash, and were well out into the bay when our skipper put his foot down (I assume that’s the nautical term).

The nose went up, the stern went down, and the beauteous boatful of bloggers all reached for their hair in a mixture of exhilaration and dismay as the sudden burst of speed hedge-backwardsed them in one delightful moment.

The launch was fit for a Queen, and certainly up to Royal Barge standards, with speedboat acceleration and the ability to get in close to places that a superyacht simply couldn’t… and all, this time, for a rather more modest third of a million Euros.

Monaco is just a memory now, with Ocean International and its fleet of yachts due to make their next big appearance at the Fort Lauderdale International Boat Show – known as Flibs – in November.

Ocean Independence – How and where

Ocean Independence has 16 offices worldwide, supporting a multilingual team from 24 nationalities. You can contact any of the Ocean offices for assistance about owning, chartering, buying, selling, building and managing private or charter yachts.
Web: www.oceanindependence.com 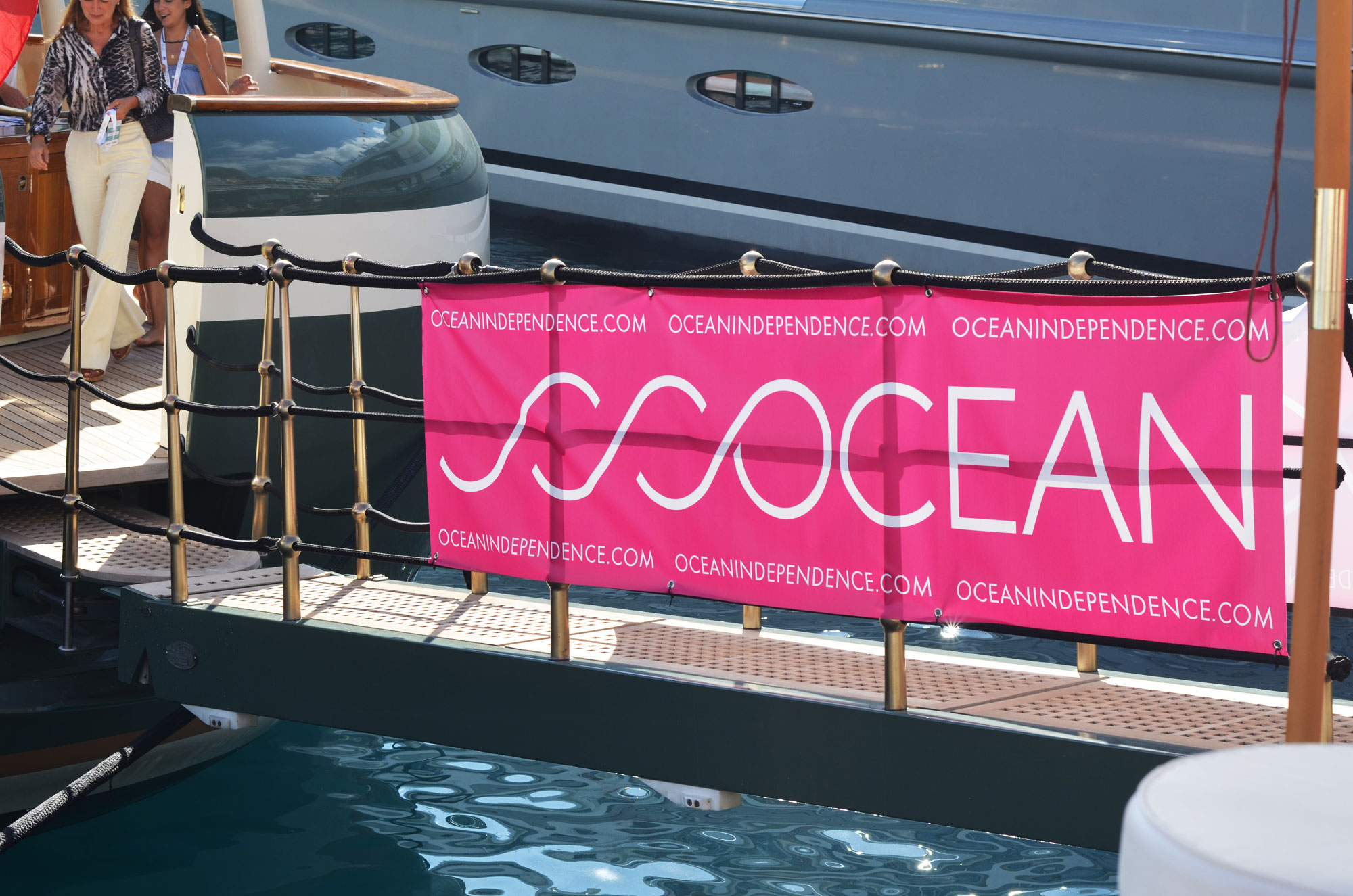