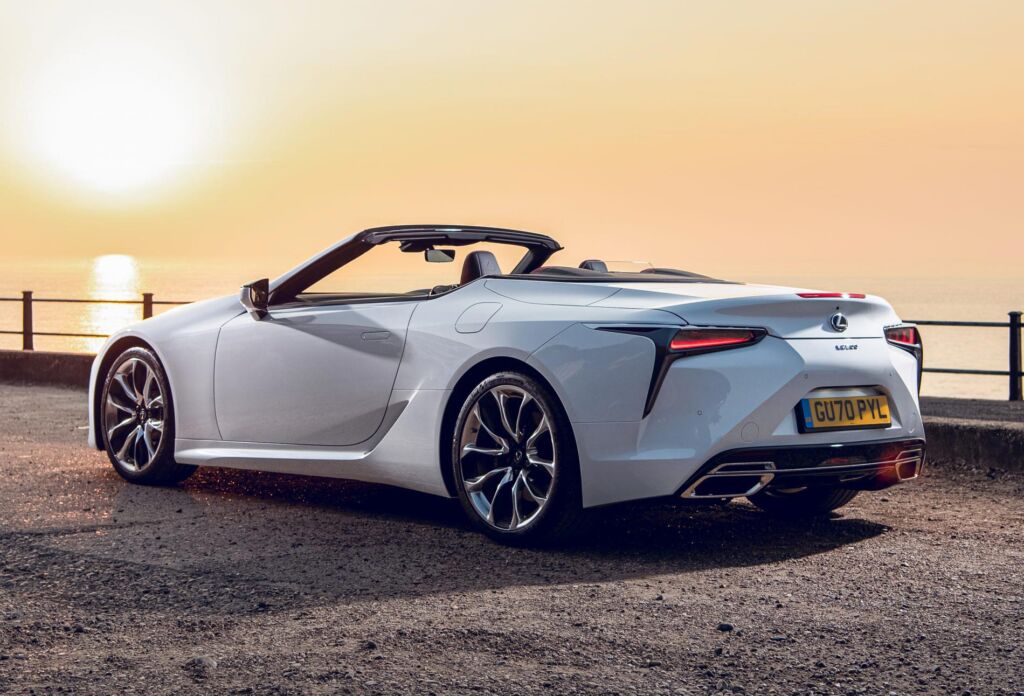 Simon Wittenberg heads out for a pre-Christmas drive in the new luxurious Lexus LC 500 Convertible.

Overview
With temperatures hovering just above freezing, one could argue that December is not the most opportune time to be trying out a drop-top. Still, apparently, the cooler months are one of the best periods of the year to buy one in terms of being able to get a deal before demand spikes again as the weather hots up.

At the end of the day, the Lexus LC 500 Convertible is a practical all-year-round car, so it’s just as important to see what it’s like to live with when the hours of sunshine are in short supply, and when the weather conditions tend to be more unsettled. 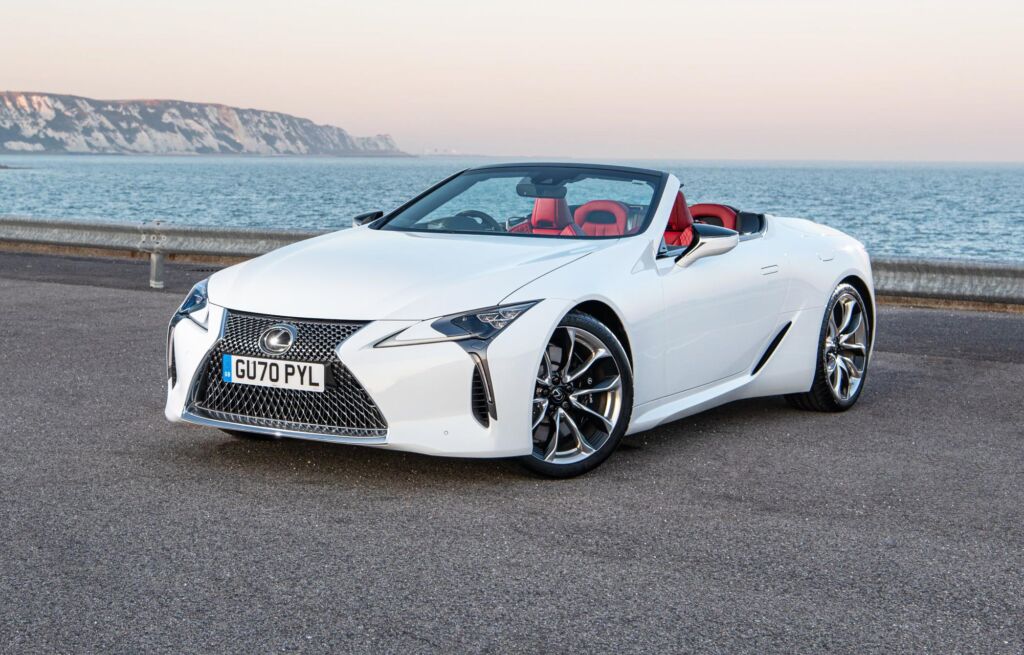 The new two-door from the Japanese marque is the latest addition to the LC family after first being shown to the world in Los Angeles at the end of 2019. However, this is not the first model that Lexus has made with a folding roof, but it’s the first to have a soft top.

The LC 500 Convertible actually follows in the footsteps of the likes of the avant-garde SC 430 from 2001, the IS 250 C from 2009, with a few concepts also featuring along the way.

We drove the stunning Lexus LC 500 coupé a couple of years ago in the Malvern Hills, and it was nice to be back behind the wheel of a second variant. With a starting price of £90,775, the latest addition to the ‘500 family’ isn’t cheap and is effectively sharing the same territory as Aston Martin and Porsche at this price point. 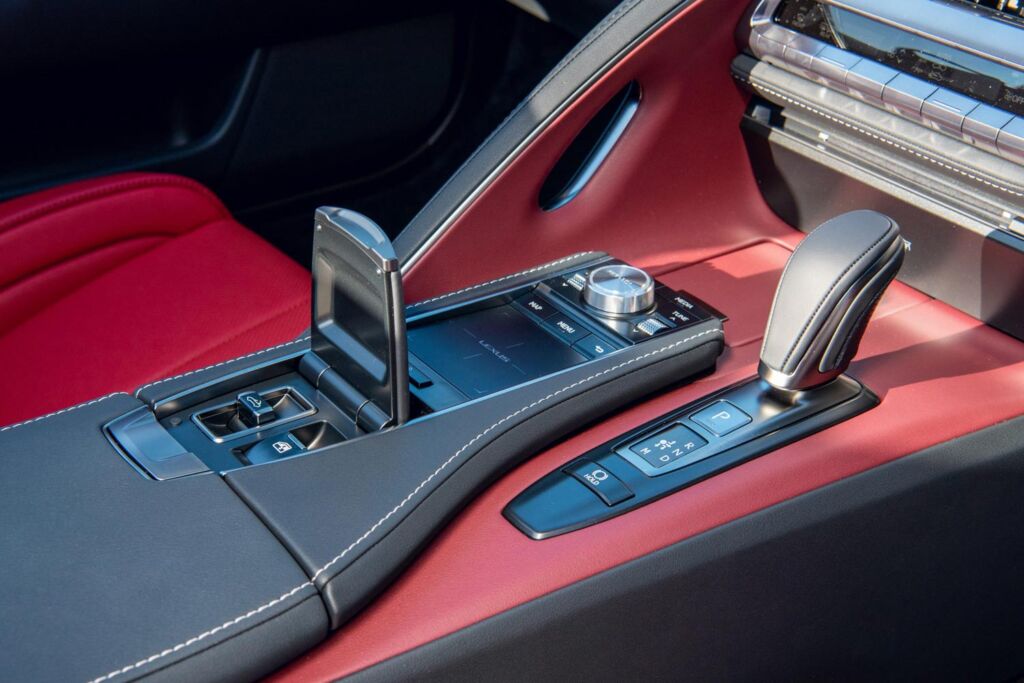 There are two variants available, which are namely the LC 500 Convertible, and the LC 500 Convertible Sport+, i.e. with the Sport+ Pack. We tried the latter, and it basically adds 21-inch forged alloy wheels, semi-aniline leather seat upholstery and integrated neck heaters to the standard spec, although these can also be bought as paid-for options.

For the LC 500 Convertible line-up, there’s no V6 hybrid alternative like there is for the LC 500, so the 464 hp 5.0-litre V8 is the sole source of propulsion. With a ban on petrol and diesel power looming in just ten years’ time, now is the time to take advantage of being able to enjoy the pleasures of a pure naturally aspirated internal combustion engine before this species becomes extinct. 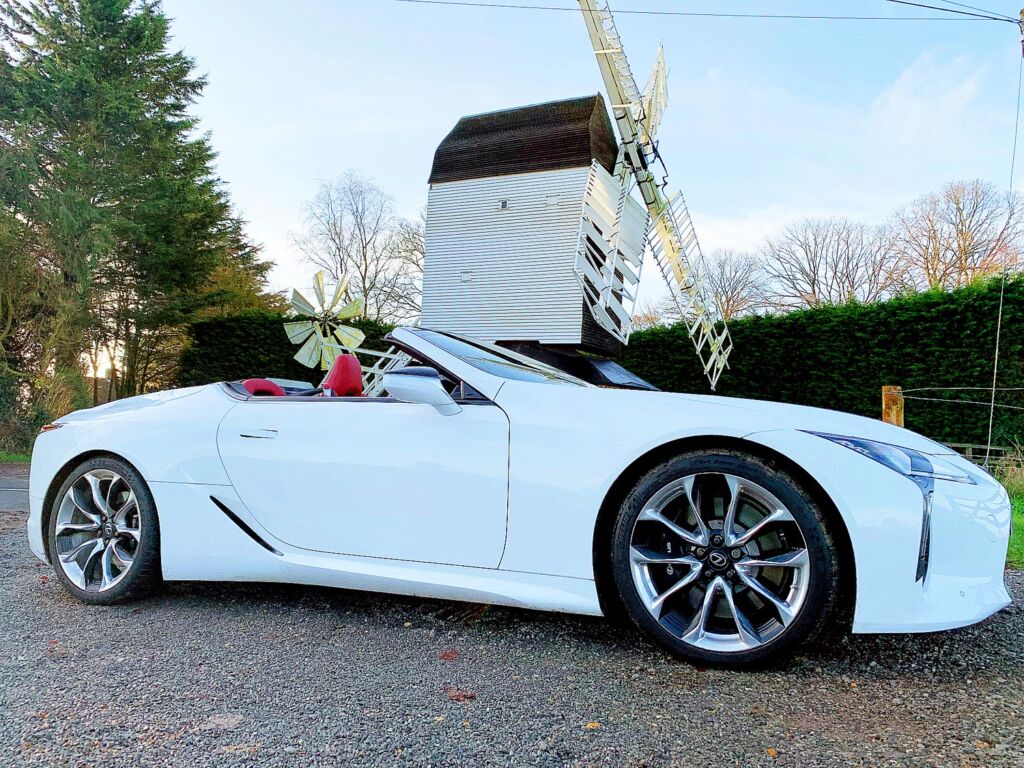 On the outside
The Lexus LC 500 Convertible is undoubtedly a good-looking car, and the styling team headed up by Chief Designer Tadao Mori has certainly delivered. The four-layer folding fabric roof on this model comes in a shade of either black or beige on Lexus’ online configurator, which is complemented by 12 body colours, available in metallic, solid and mica finishes. Our test car came in F Sport White (a no-cost standard metallic option) with a black top, a visually-appealing combination.

To avoid compromising the balance and behaviour of the car, the components for the roof mechanism have been cleverly packaged within the wheelbase, and for some extra trivia, the frame itself is made from magnesium and aluminium to keep weight to a minimum. It’s actually worth taking the time to peer in the rear-view mirror when activating the roof to really appreciate how many different parts need to come together in harmony to put on the ‘show’.

The distinct hourglass-shaped Lexus grille dominates the front-end of this model, which is flanked by the stylish inward-facing sweeping LED headlights. On to the side, and the LC 500 Convertible has a sleek and muscular appearance, and the vents housed within the rear wheel arches are amongst the standout features. At the rear, twin chrome tailpipes, a retractable spoiler, the sabre tooth-like indicator lamps and the chrome LC 500 badge sitting on the boot lid complete the beautiful exterior of this model. 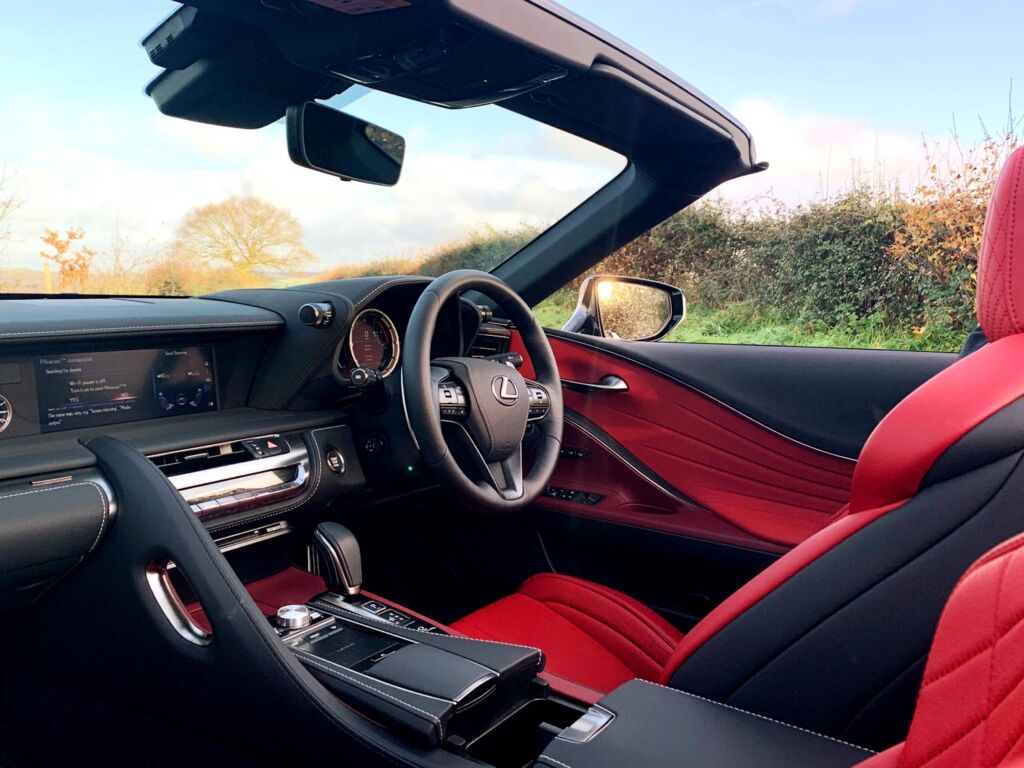 On the inside
Upfront, the plush cabin of the LC 500 Convertible is extremely spacious, and being a 2+2, there are two small seats in the back. This means that four occupants can be accommodated at a push, although leg and headroom do come at a premium when the electronically-adjustable and heated front seats are reclined.

The plush interior of our test car was dressed in Flare Red semi-aniline leather, with chrome surrounds on the key instruments housed within the centre console, where you’ll find the traditional Lexus four-square touchpad, the volume dials and the auto gear shifter. 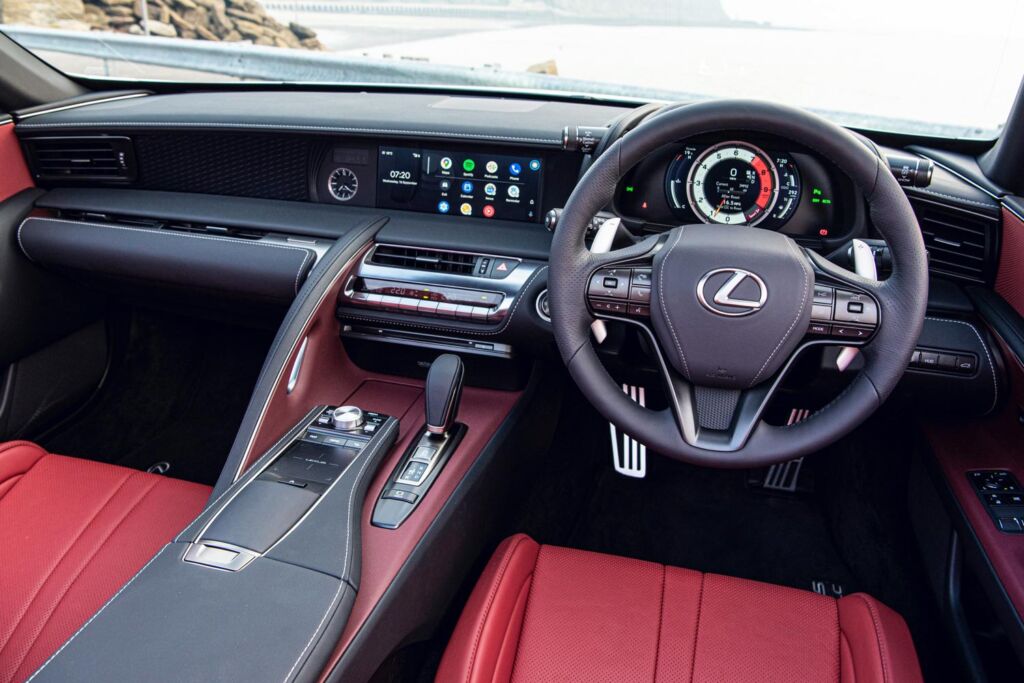 The only analogue display when you’re behind the wheel of this car is the Lexus-branded clock, which still has the old-fashioned hands to let you know the time of day. The dashboard is entirely digital, and comes courtesy of an oval-shaped eight-inch TFT display, which can be customised according to the information you wish to have in front of you, with a G sensor being one of these options – not so useful on the road, but probably highly beneficial when on track. However, it’s very intuitive to use, and all of the vital stats are clear to see.

To the left of this is a 10.3-inch screen for the satellite navigation (with full European mapping when there’s the opportunity to go abroad) and audio entertainment, delivered in our test car via the 13-speaker Mark Levinson Premium Surround Sound System, costing £1,000 for the privilege.

This display also doubles up as the interface for the reversing camera, which came in handy when having to back up narrow single-track lanes. Lying underneath this screen are smart piano-like toggle switches to activate the dual-zone climate control and ventilation. 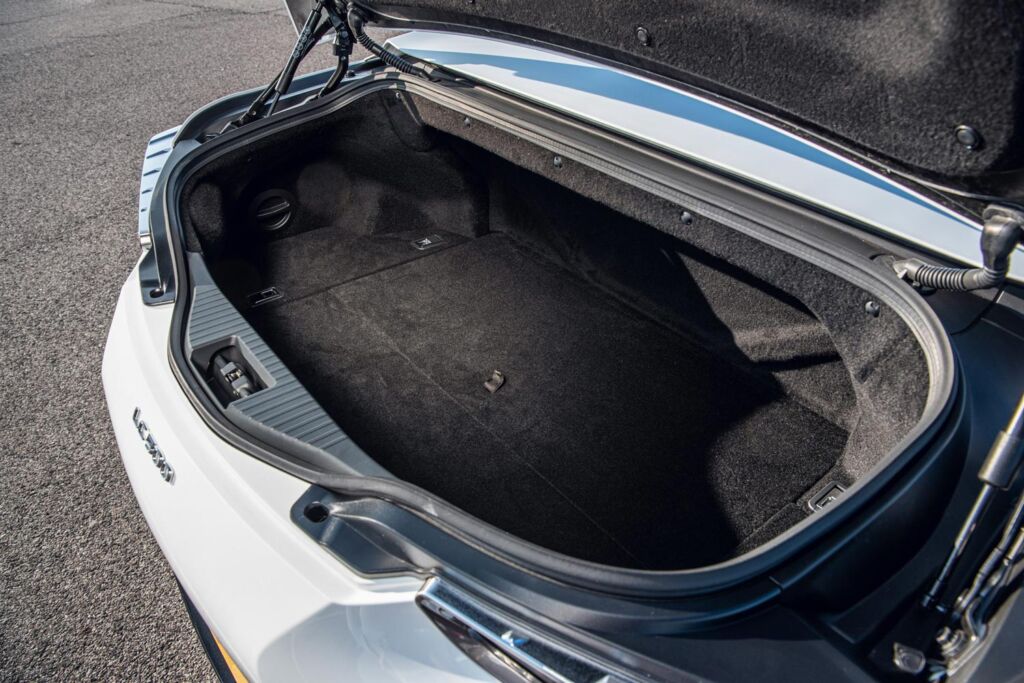 In terms of in-car storage, there are numerous compartments spread around the cockpit, with deep door pockets, the central armrest and other cubby holes providing plenty of different areas to store any drinks bottles or accessories. This is of course, excluding the other 149 litres of space in the boot, which is ample to accommodate a few bags of shopping or a small amount of luggage when heading away for the weekend. 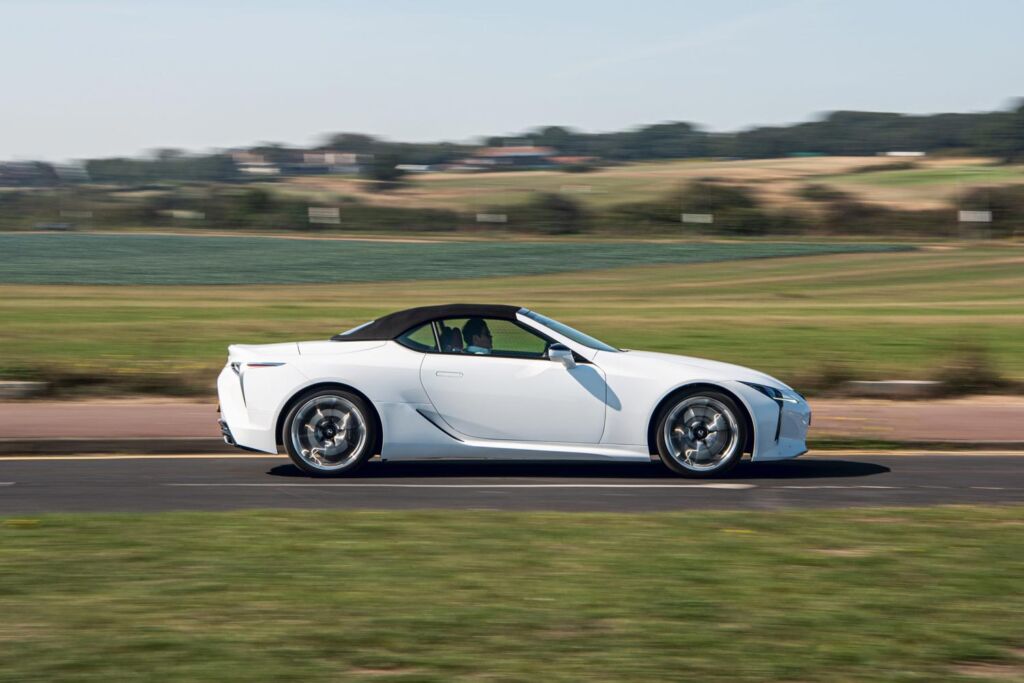 What’s the Lexus LC 500 Convertible like to drive?
It’s just as enjoyable as the last time out in the LC 500, if not more. With the roof retracted, it’s always a completely different driving experience when you feel immersed in your surroundings and can truly appreciate the acoustic soundtrack of the V8, rather than being shielded by the insulated cabin.

We headed out on to the A-roads and some country lanes around Hertfordshire, and what is immediately noticeable is just how smooth the ride is on the run-flats. As you would expect, the 5.0-litre V8 powerplant lying under the 500’s sweeping bonnet is mighty, and the car is immensely quick, despite weighing in at two and a half tonnes.

There’s no manual option for this car, but this is almost irrelevant when you have a fast-shifting 10-speed automatic transmission at your disposal. This gearbox has tightly-packed, but evenly spread-out ratios (a world-first for a passenger car according to the official blurb), so is extremely responsive when you put your foot down. If you prefer being in control of the gears, there are the magnesium alloy paddles sitting behind the steering wheel, positioned within easy reach of your fingertips. 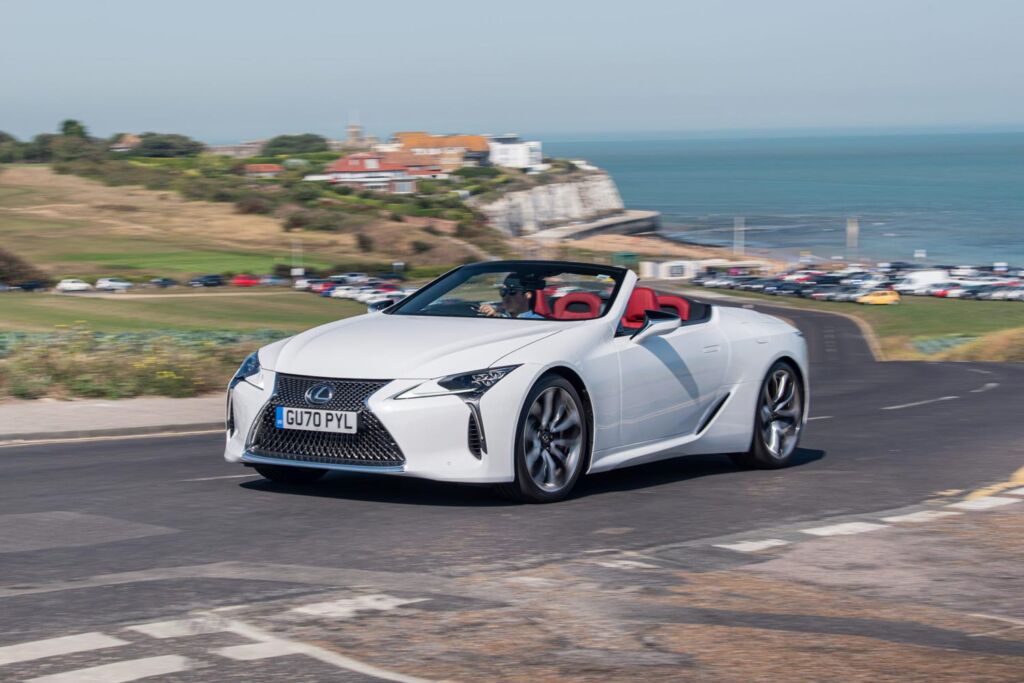 The handling of the LC500 Convertible is superb, with pinpoint accuracy when guiding the car into the corners, and it didn’t feel too jittery where there were some irregularities in the road. It’s also evident to see the work that has gone into making the driving position an optimum ergonomic position, and the front sports seats are extremely comfortable when on the move, providing ample support.

In fact, The LC 500 Convertible is packed to the brim with safety systems and driver aids, one of these being the added option of a full-colour head-up display with a Lexus card key (priced at £1,250) – It makes life so much easier when you don’t have to constantly look down at the speedo and can maintain your focus on the road ahead. There’s also blind-spot monitoring on the heated door mirrors, road sign assist and cruise control, to name but a few of the on-board systems.

On a crisp winter’s day, it’s difficult to feel the chill, as heat emanates from multiple sources. Once you have dropped the roof, which can be done at speeds of up to 31 mph, and which takes only 15 seconds courtesy of the hidden toggle switch in the palm rest, this is when the Climate Concierge system kicks in, adapting heating and ventilation performance according to whether the roof is raised or lowered.

Adjustable heaters built into the headrests direct air on to your neck (part of the Sport+ Pack), plus there are the heated steering wheel and heated seats, which can be controlled via the touchpad.

Behind the rear seats, there’s a transparent wind deflector, which comes as standard, and has been designed to reduce the airflow, so it’s quiet enough to have a conversation when the soft top has been retracted. 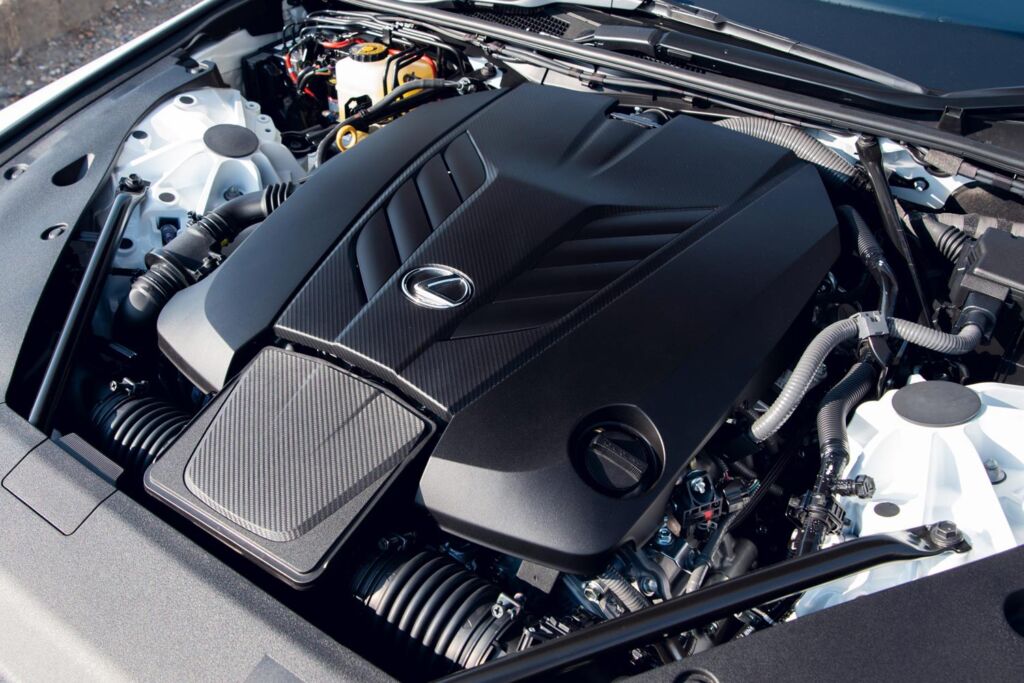 The running costs
As you would expect from a full-blown V8, CO2 is relatively high at 275 g/km, which means that you’ll be paying £2,175 in road tax in the first year before any other running costs, such as insurance, which for this model, is classified as group 50. Combined mpg is quoted at 24.1, but how quickly the fuel tank is emptied obviously depends on driving style, and ultimately, how heavy your right foot is.

In summary…
The Lexus LC 500 Convertible is the perfect all-year-round companion, even in the winter months when the mercury has dipped, and there’s plenty of reasons to praise this car. Granted, it faces some stiff competition from other luxury marques, but the design and engineering behind this masterpiece have been calculated to a tee.

This makes the LC 500 Convertible worthy of consideration next time you’re on the lookout for a top-end soft top that will keep you and your fellow passengers entertained for miles.

Lexus LC 500 Convertible – Where and How?

For more information on the Lexus LC 500 Convertible, visit www.lexus.co.uk.

Take a look at our Instagram page for pictures from our road test.